Cinder has been in harms way at least three times in her short life. She was saved from fire, from nearly becoming dogfighting bait, and from sitting with the clock ticking on her life in a shelter when she was dumped by her family. A woman living seven hundred miles away rescued her and gave her the good home she deserves.

Cinder, then called Nancy, was in a fire in New York and was rescued by some New York firefighters, then taken to the shelter. She was adopted by someone who they found out wanted to use her for pit bull dogfighting bait and was taken away from those people. Then she was adopted by another person who had her about a year and they returned her because they said she didn’t like their new dog. Once again she ended up at the NYC ACC.

Nancy had her photo posted at the Pets on Death Row’s Facebook page* on November 8, 2011 The 2 year old black beauty who’d twice been in harms way, and was then discarded by her family, got a lot of notice as this photo from the high-kill NYC ACC was shared by rescuers and and animal lovers, and was passed into news feeds on Facebook. Everyone was struck by Nancy’s photo and wished her well, and a conversation followed under her original picture at PODR. A woman who’d met and interacted with Nancy at the ACC wrote the following day, “Tick Tock, Tick Tock the clock is going and Nancy needs your help. She doesn’t have much time left. All I see are comments and no offers. Please, this girl is super. Don’t fail her. It’s happened to way too many already. Please help Nancy.” She had been prescribed doxycyclene for a cold on November 6, a condition that spreads  chronically at the facility and places those animals that contract it in danger of being killed.

Nancy was one of the lucky ones given a chance at adoption, and had her listing put on Petharbor, though that did not guarantee she would be allowed to live for long. She was granted time and was still at the shelter on November 14. In the days immediately preceeding the 14th, Joyce Yoho, from Lansing MI, was so touched by the sweet girl’s photo and precarious position, that she communicated on the comment thread and with rescues in the NYC area in an effort to adopt her. Joyce said of this, “I saw her picture and had an immediate reaction that I wanted to adopt her.” No one seemed to be able to help Joyce, and some said they didn’t do “pulls” of animals for long-distance transpost. Joyce was told that transport would be difficult to arrange and very expensive. At that point, she offered to pay for Nancy to be pulled and saved by a rescue, even though she could not adopt her.

Things changed when Kerry Hilliard of Rikki’s Refuge Animal Sanctuary in Orange, VA (home of Vincent Cat) was finally able get information on transporters, and to arrange to have Nancy pulled from the facility for Joyce, the first and most crucial step to ensure she wouldn’t be killed. Another woman, from the greater area near NYC, pulled Nancy and sent her to a boarding facility for a few days.

Joyce arranged to drive from Lansing to stay in Wheeling, WV with her brother for several days over the Thanksgiving holiday, and a transport plan was put in place. There were some nervous moments as a link in the transport chain fell apart, at which point an angel in human form came through to help with transport. Katie Adamwow Wandall, of Bucks County, Pennsylvania, had Cinder delivered to her home, then made the long drive to Wheeling on Thanksgiving Eve. Katie and Joyce, Facebook friends and devoted cat lovers, met in Wheeling for the handover. Joyce feels Katie deserves much of the credit for helping with Cinder, and gratefully said, ” Katie and Ed drove 6 hours on the night before Thanksgiving to bring her to Wheeling and had to stay at a motel and drive back home the next day for Thanksgiving dinner.” Not only did Katie make a long drive, she put a new plan into action when transport was in doubt. In Wheeling with Joyce’s brother

Cinder and Joyce spent their first days together in Wheeling, where the kitty immediately felt comfortable with Joyce’s brother. After the visit, the two travelled to Lansing to settle Cinder into her new home and begin the process of introducing her to Joyce’s other cats. There was minor trouble when alpha cat Icy was unwelcoming, requiring the two to be kept apart for a while. Both kitties wear calming collars, and are getting along better now.

Cinder is happy, healthy, and putting on a bit of weight. She is loving and sweet and finally knows what it’s like to have the stability of a loving forever home. Joyce loves her new girl and is happy to have saved a cat who needed someone. 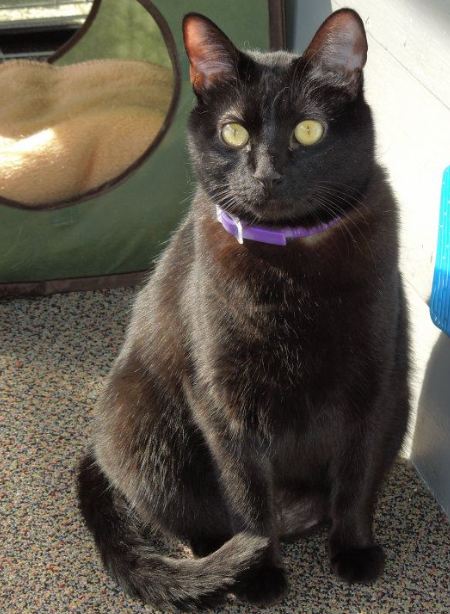 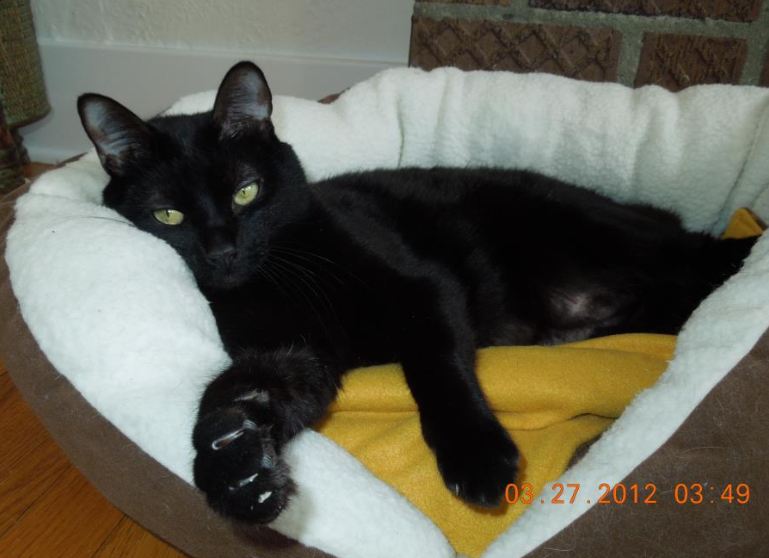 * Pets on Death Row is a network of volunteers working to save cats and kittens from the New York City ACC before they are killed daily. We have hours from the time they are listed until they are killed. PODR is NOT affiliated with NYC ACC. The group posts photographs of cats and dogs on Facebook, where they are shared by rescuers and crossposters, and seen by many animal lovers.

2 thoughts on “Cinder’s Story: From Harm’s Way to Happy Home”