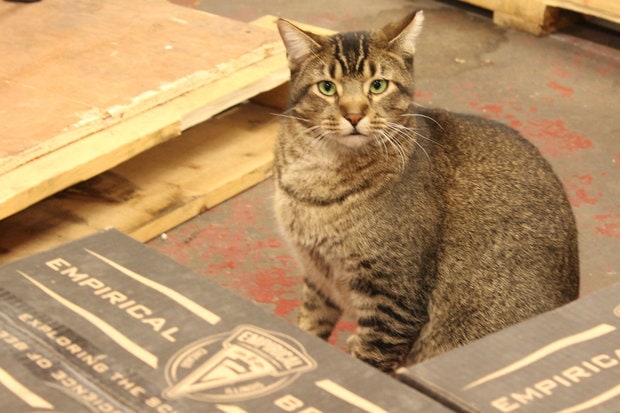 So what do cats, rats, grain, and beer have in common besides the makings of a good bar joke?  Well, believe it or not, it’s no laughing matter for many breweries as rats find the grain used to make the favored brew most delicious.  While pest control can certainly take a turn to dampen the problem, seems that one of the best solutions for discouraging the varmints is one that is centuries old tried and true.  Cats. Top Photo- Venkman, one of the four Ghosterbuster-monikered cats at Empirical Brewery

Distilleries have long been fans of felines as their very presence keeps the critters at bay and the ones who are wanton to try and beat the odds become fodder for the guards on duty.  Jameson’s Distillery had Smitty who was so beloved they had him stuffed and he continues to watch over the place to this day, while  Glenturret’s Towser, who holds the Guinness Book of World Records mouse catching number of 28,899 during her lifetime, is immortalized in bronze at the site.  They are not alone though in understanding the value a cat can bring to keeping rats out and the cost of good down.  Having to throw away ruined grain is never any good for the bottom line.

Now, take that one step further and you have a marriage made in a brewery.  Organizations like Tree House Cats at Work Project in Chicago, IL, and Kentucky Humane Society’s Working Cats, have programs that team feral cats with businesses, like breweries, to keep those rats out.  And it’s working successfully.  The Cooper Albany Distilling Company, Apocalypse Brew Works, Pipeworks,  Empirical Brewery, and Brooklyn Brewery who, sadly, lost 13-year-old Monster in 2012, are doing the cat thing with great success. This is the ultimate win-win.  Feral cats find a home.  Brewers have their grain safe-guarded and feline companionship.  Beer drinkers have their beverage of choice.  The only losers?  Clearly, it’s those dirty rats.