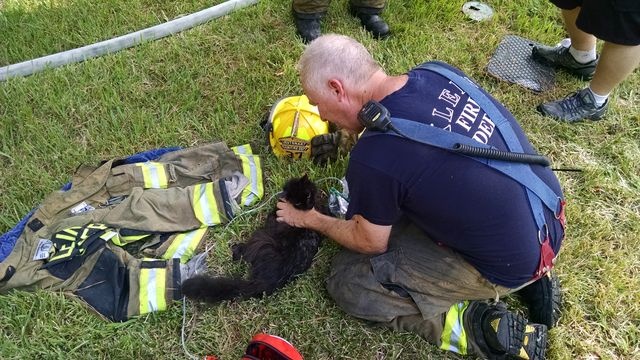 After his petdad’s heroic efforts failed, Harris County, Texas firefighters rescued a cat and revived him with oxygen on Monday when his family’s garage exploded and smoke and flames spread to the house.

A Spring, Texas man pulled out his lighter to light a cigarette outside at about 6:45 Monday morning and triggered a gas explosion that destroyed the family’s garage and caused the fire that spread to their house.

Neighbors heard the explosion and called for help. Meanwhile, the man rushed back into the house and ran upstairs to save his sleeping wife. While outside, he tried to get his car out of harms way, then he went back inside, facing intense heat and thick smoke, to try to save the family’s cat. He was unable to rescue the cat and had sustained injuries from the explosion and fire.

“The wife was still asleep when the fire and explosion happened, so he actually went in, woke her up and got her out. There may have been some attempts to try and locate the cat and also I believe he tried to move the vehicle,” said Lt. Dean Hensley, Harris County Fire Marshal’s Office.

Firefighters from the nearby town of Klein found the cat and removed him from the home, then revived him with oxygen at the scene.

The garage was completely leveled, the home was partially burned and a neighboring home was somewhat damaged. Grass and trees were also burned.

The cat was taken for more treatment at a local veterinary practice and the homeowner was rushed to the hospital.

The explosion is thought to have been caused by leaking propane gas containers stored in the garage, with the leaked gas ignited by the cigarette lighter. There was also an oxygen tank in the garage. 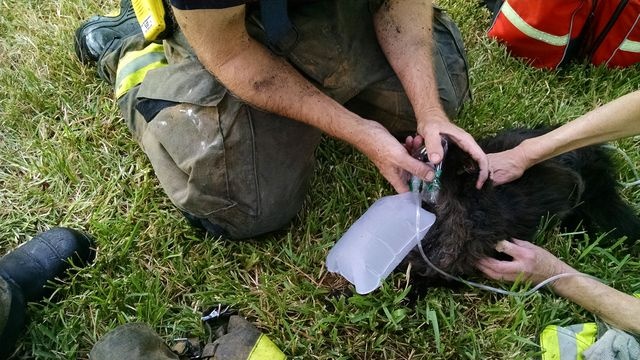 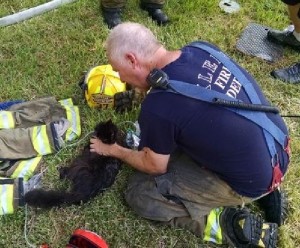