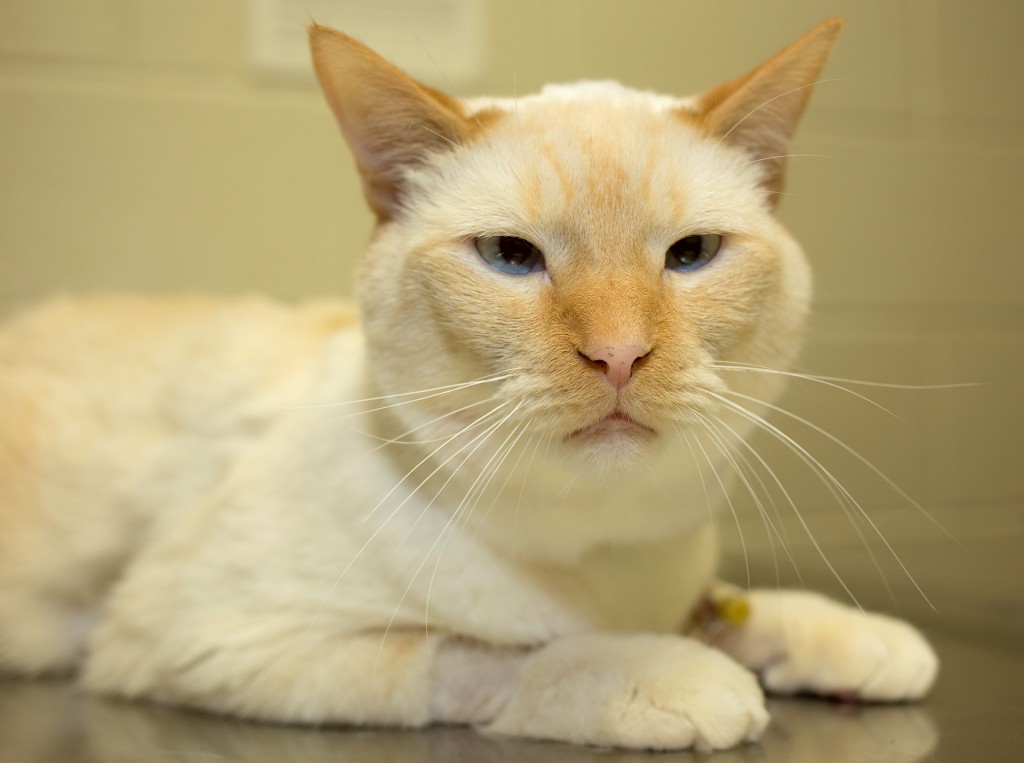 A flame point Siamese cat named Arthur had a life-saving kidney transplant in May, in the second ever successful feline surgery that used stem cells to optimize acceptance of the new organ.  The transplant was performed at the University of Georgia Veterinary Teaching Hospital.

Arthur was near death before the surgery and was not a good candidate for a kidney transplant because his body couldn’t absorb an immune suppressant well and would likely reject the new organ.  His desperate owners, Tony Lacaria and Frederick Petrick Jr., were refused by both the University of Pennsylvania and University of Wisconsin veterinary hospitals and took a chance that the University of Georgia hospital would help their beloved cat.

“At that point Arthur was very ill. He was dying,” Lacaria told the Athens Banner-Herald, which did a story on Arthur’s transplant. “We got in the car and drove for 10 hours to get to (UGA). We didn’t even know if we would be accepted into UGA’s kidney transplant program. He only had a few weeks to live. We were very upset.”

Dr. Chad Schmiedt,  who heads UGA’s feline kidney transplant program, met with Lacaria and Petrick and suggested using feline adult stem cells to help with immunosuppressive protocol  for the transplant. The petparents agreed and the stem cells were grown in the University’s Regenerative Medicine Service laboratory from a chunk of fat harvested from Arthur a week before the May 15 surgery.

Arthur recovered from his surgery in hours, rather than the weeks typical for most feline kidney transplants. His speedy recovery is attributed to the beneficial effect of the stem cells. The other cat that had a transplant at UGA using stem cells is reportedly doing well a year after its 2013 surgery.

Arthur is not the only beneficiary of this breakthrough approach: His donor, a cat named Joey, who was part of the University’s research program, has found a home with Arthur and his family. As with the University of Pennsylvania’s animal transplant program, UGA requires the recipient’s family to adopt the donor animal.

Read the full story on the surgery below, from UGA.

Athens, Ga. – Veterinary surgeons in the University of Georgia Veterinary Teaching Hospital successfully performed a kidney transplant in a domestic cat and used stem cells harvested from the patient to optimize the cat’s acceptance of the new kidney.

The surgery, performed in May, is the second successful feline kidney transplant using feline adult stem cells performed at the hospital.

The transplant patient is a nearly four-year-old flame point Siamese male named Arthur, whose owners brought him from Virginia to undergo the procedure at UGA. Arthur was diagnosed with chronic renal failure about a year ago. Two other veterinary teaching hospitals had previously declined to perform Arthur’s surgery due to possible complications, including concerns that tests showed Arthur’s body did not absorb as much cyclosporine as desired. Cyclosporine suppresses the immune system so that the donated organ is less likely to be rejected.

“We used feline adult stem cells in one other transplant that we did last year,” said Schmiedt, who noted a growing body of studies detailing the successful use of adult stem cells in human renal transplants. “A study published in 2012 found the use of MSCs during renal transplant surgery in humans lowered the risk of acute organ rejection, decreased the risk of infection, and the patients had better estimated renal function one year after surgery.”

The first cat to receive mesenchymal stem cells during a kidney transplant at UGA’s Veterinary Teaching Hospital is doing well a year after surgery, which was performed in 2013.

“We closely follow all of our transplant cases, and stay in touch with both the referring veterinarians as well as the owners for the life of the patient,” Schmiedt said.

Mesenchymal stem cells can be derived from fat, bone marrow and neonatal tissues such as placenta or umbilical cord. Schmiedt harvested fat cells from Arthur, and the UGA Regenerative Medicine Service grew the stem cells from the fat sample prior to Arthur’s surgery.

The service laboratory is managed by research professionals Merrilee Thoresen and Jenny Mumaw, who is enrolled in the college’s doctor of veterinary medicine program and will graduate in 2016. The service is headed by Dr. John Peroni, a board-certified large animal surgeon and associate professor whose research focus includes stem cell therapeutics.

Arthur’s transplant surgery was conducted on May 15. The renal transplant process involves two surgeries: one to harvest a kidney from the donor cat and the other to transplant the donated kidney into the recipient. Each surgery is a two- to three-hour procedure, Schmiedt said.

Arthur’s new kidney was donated by a cat named Joey, who had been part of a research program in the College of Veterinary Medicine. The feline transplant program at the UGA Veterinary Teaching Hospital requires that the donor cat be adopted by the recipient cat’s family—so Joey and Arthur will become lifelong playmates.

“Cat owners who seek kidney transplants for their sick cats have to be very dedicated,” Schmiedt said. “They will give their cat medication twice a day for the rest of its life. They also must be willing to take their cats to the veterinarian for frequent medical checkups… a significant amount of time and expense is involved in keeping the recipient and donor cats healthy. But cat lovers who will go to this extent typically are willing to extend this kind of care to all cats they own.”

Joey’s new owners have already contacted the teaching hospital’s Behavior Medicine Service for advice on helping Joey transition to his new home where, in addition to Arthur, he’ll find five other feline friends.

Arthur, meanwhile, will continue to receive stem cell treatments. His initial treatment was given during the transplant surgery, and additional stem cells will be shipped to Arthur’s regular veterinarian, who will then give repeated doses to Arthur as he recovers.

Both Schmiedt and Peroni see promise in using mesenchymal stem cells in the transplant setting.

“MSCs in veterinary species have been primarily used to treat musculo-skeletal injury—problems with bones, tendons and joints—and those are our most frequent uses here at the UGA College of Veterinary Medicine,” said Peroni, who is also past chairman of the North American Veterinary Regenerative Medicine Association’s board. “But there is good evidence to support using stem cells to modulate the immune system and regulate inflammation. So, the transplant setting might be another optimal use for these types of stem cells.”

In the broader realm of treating feline renal disease, there are ongoing studies to determine the efficacy of using stem cells to treat the disease, Schmiedt notes. Findings thus far suggest the use of stem cells does not improve kidney function, but it may slow down the progression of the disease. But in the transplant setting, Schmiedt feels they offer great benefits to the patient.

“The only down side is harvesting the cells seven to 10 days ahead of the surgery, which adds to the cost of the transplant procedure,” Schmiedt said.

Companion animal owners interested in the use of stem cell therapies should ask their veterinarian to consult with the Regenerative Medicine Service about the potential benefits. For more information on the UGA feline transplant program—one of three active transplant programs based at a teaching institution in the U.S.—see www.vet.uga.edu/hospital/services/surgery_sa/.

UGA College of Veterinary Medicine –
The College of Veterinary Medicine, founded in 1946 at UGA, is dedicated to training future veterinarians, conducting research related to animal and human diseases and providing veterinary services for animals and their owners. Research efforts are aimed at enhancing the quality of life for animals and people, improving the productivity of poultry and livestock and preserving a healthy interface between wildlife and people in the environment they share. The college enrolls 114 students each fall out of more than 900 who apply. For more information, see www.vet.uga.edu.