Fum the cat and his pal Gerbra the owl captivated the world with a video in 2011. They’re back in a beautiful new video that celebrates their amazing friendship.


Fum and Gebra live in Spain. According to their website:

Fum is a black cat. His is a Catalan name that means “smoke”.

Gebra is an owl (Tyto Alba). She was born in Andalucía, and has been trained the falconry way, which is an ancient practice in Europe and Asia. Her name is originating from the Catalan “Gebre”, that means “frost”. It has been possible to get her little domesticated because she was hand-reared, but Gebra doesn’t allow any human contact but the hand that feeds her. By this reason, when she notices some interest from the humans on her, she flies away and doesn’t come back until she feels the danger has disappeared. Gebra goes out flying daily during the falconry season that is from September to June approximately. Falconers use to hold up the birds of prey during the moulting process. When the feather replacement has fully finished there is no danger for the feathers to keep a good health during all the season.

The interplay between Fum and Gebra doesn’t happen daily. Sometimes Fum prefers to spend his time hunting, rather than accompany Gebra on her daily about half an hour flight. Then Gebra goes back to her “muda” (mews) and remains there, in the semi-darkness, during the rest of the day.”

If you haven’t seen it, or want to revisit it; here’s the original video, from May of 2011, Cat and Owl Playing – Fum & Gebra – Perfect friendship! 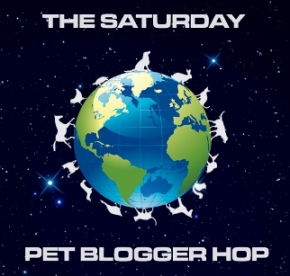 We’re participating in this week’s Saturday Pet Blogger Hop, hosted by Life With Dogs, Two Little Cavaliers and Confessions of the Plume.