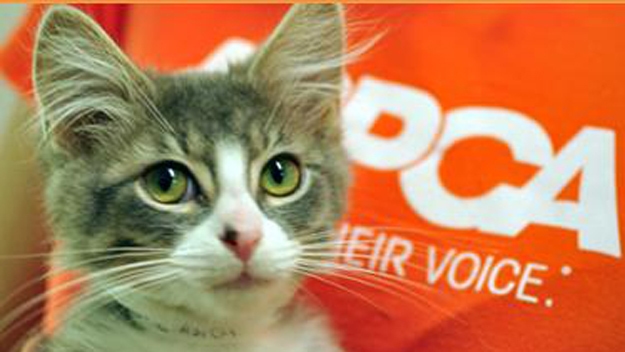 The American Society for the Prevention of Cruelty to Animals (ASPCA) is the foremost advocate and defender of animal rights since its inception in 1866 by founder Henry Bergh. Believing that all animals deserve respect and kindness, the organization has worked hard to drive legislation and programs to that end. The following article on urine marking is one of the many resources they provide to better the lives of animals and the understanding of their caretakers.

The most common behavior problem reported by pet parents of cats is inappropriate elimination. It’s estimated that 10% of all cats will eliminate outside their litter box at some point in their lives. Quite a few of these cats have issues with some characteristic of their litter box (please see our article on Litter Box Problems for more information), but approximately 30% don’t have litter box problems at all. These cats are urine marking, and urine marking isn’t a litter box problem—it’s a communication problem. Urine marking is a form of indirect communication used by cats.

Why Do Cats Urine Mark?

Animal species who live in social groups in which the members depend on each other for survival have sophisticated interpersonal communication. Particularly animals who can cause significant harm to each other—like dogs—have developed a social mechanism for preventing conflict through interpersonal ranking. They are prepared to assume either a leadership or deference position, and they can read another animal’s body language to interpret his intentions and react accordingly. But cats have a somewhat unique social structure in that they do not hunt, eat or sleep in groups like dogs.

Given the opportunity, cats go off on their own when they mature and claim certain areas or territories for themselves. They might share a territory with other cats, but it’s a time-share approach—they avoid each other whenever possible. They haven’t developed a social system or a communication system like dogs. Socially, cats who greet often handle things like two neighbors in an argument—although one might back down if he thinks he might get injured—neither individual will ever perceive himself as having lower status than the other. Cats have no system for working out face-to-face disputes, so face-to-face disputes can be dangerous for them. To avoid disputes, cats communicate indirectly—they leave messages.

Cats have numerous ways to leave messages for each other, and one way is through urine marking. By urine marking, a cat tells other cats of his presence and makes a statement about such things as what piece of property is his, how long ago he was in the area and, over time, when other cats can expect him to return. Cats can even advertise when they are looking for a mate. All this information is available to other cats in the urine. This way, cats rarely have to meet up with each other.

Cats who live in houses might not have to hunt for their food or find a mate, but they still look at their world in the same way as cats who must survive on their own. They can only use the social and communication skills that nature gave them. If their world is predictable, there are no conflicts, they are spayed or neutered and they don’t need a mate, cats have little reason to mark and probably will not. But, if they want a mate or they are distressed about something, they’ll deal with their distress like any cat: they’ll mark their territory. To a cat, marking helps keep unwanted individuals away—whoever and whatever those individuals may be—and it creates an atmosphere of familiarity that makes them feel more secure.

How Can I Tell If My Cat Has a Litter Box Problem or a Communication Problem?

The following is a list of characteristics that indicate urine marking:

There are also certain characteristics of a cat or a household that can contribute to urine marking:

Here are a few things you can do to remedy the urine marking behavior of an intact cat:

Treating Urine Marking Caused by Conflict in a Multi-Cat Household

The first step in fixing any elimination problem is to rule out medical problems. Although there is no medical problem that contributes specifically to urine marking, physical problems can create increased anxiety in a cat, which can contribute to marking. Once your veterinarian has determined that your cat doesn’t have a medical condition or issue, consider the following guidelines:

You can try the following recommendations to remedy urine marking behavior caused by conflict with an outdoor cat:

What NOT to Do

Here are a few things to avoid when treating urine marking:

We Are Their Voice

The American Society for the Prevention of Cruelty to Animals® (ASPCA®) was the first humane society to be established in North America and is, today, one of the largest in the world.

Our organization was founded on the belief that animals are entitled to kind and respectful treatment at the hands of humans and must be protected under the law. Headquartered in New York City, the ASPCA maintains a strong local presence, and with programs that extend our anti-cruelty mission across the country, we are recognized as a national animal welfare organization. We are a privately funded 501(c)(3) not-for-profit corporation, and are proud to boast more than 2 million supporters across the country.

The ASPCA’s mission, as stated by founder Henry Bergh in 1866, is “to provide effective means for the prevention of cruelty to animals throughout the United States.”