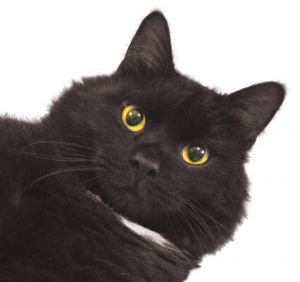 Q: “Why has my 6 year old male neutered cat suddenly decide to pee around the house? He still uses the litterbox, and doesn’t pee outside of it every day. He is an indoor cat and spends time on the screened in porch. He has been to the vet, nothing medical going on. Thanks!” – Cindy M. L.

A: Please see How to Resolve a Litter Box Problem for tips to help.

Q: “We moved to a new apt 6 weeks ago and our cat refuses to come out of the bathroom! She gets so scared when she sees a ceiling fan on that we previously didn’t have. Have tried everything from pheromones, luring with her favorite wet food.NOTHING WORKS. How long is toooo long?” – Diana A.

A: The first thing I would consider is to leave the ceiling fans off. Especially until she acclimates. She should also be put in a sanctuary room, to get her out of the bathroom,  such as the master bedroom, where she feels comfortable so she can come out of her shell. More needs to be known about the apartment layout, where she slept before the move, other animals in the family, as well as your general relationship with her. I would put her in a comfortable room where she feels welcomed, leave ceiling fans off and allow her to de-stress. Once she feels more comfortable, you can desensitize her to the ceiling fans. For instance, when she is comfortable and in another room, put the ceiling fan on low for one or two minutes. If she is frightened, next time run the ceiling fan for only a few seconds. Then turn it off. When she is in the same room as the fan, move it manually once or twice. Or, as you feed her put it on low for only a few seconds. Then turn it off. You may also have to use another fan temporarily such as a small stand up fan that doesn’t make a lot of noise. There is no timeline on fear. To get her over fear, you must use desensitization techniques first and foremost and allow her to de-stress.  Flooding her (exposing an animal to his/her fear at levels that cause panic) will usually compound the problem and make fearful behaviors worse.

Q: “I have a five year old male cat who is neutered (he is a stray who we took in when he was a few months old and he was fixed then) who sprays and pees outside the litter box. We have three other female cats and he gets along with all of them fine. I have no idea how to get him to stop spraying and to quit peeing outside the litter box. Help!” – Cindy W.

A: Please see How to Resolve a Litter Box Problem for tips. While also ruling out a medical issue, you want to make sure boxes are large enough, you have the right litter, boxes are open, there is more than one (for peeing and pooping), and that they are meticulously clean. Location is also very important.