The very first wildcats that crept into Neolithic villages in the Middle East and began living alongside humans were not tamed by our species, but most likely domesticated themselves. “Cats were not selected for a purpose like dogs and other domesticates,” geneticist William Murphy told Sciencemag.org. “They just hung out, and humans tolerated them.” Murphy is a geneticist at Texas A&M University who studies the cat genome. Cats began their relationship with humans about 10,000 years ago, compared to 30,000 years ago for dogs, Murphy said.

The theory that cats more or less chose to live with us is also supported by Carlos A. Driscoll of the National Cancer Institute who has compared the DNA of wildcats in Africa and Asia with the DNA of house cats. “[The] push for domestication came from the cat side, not from our side,” Driscoll told The New York Times as part of the article: “Study Traces Ancestry to Middle East”. Small wildcats who lived in the Near East about 10,000 years ago may have been drawn to villages to hunt the mice and rats feeding off of grains grown and stored by villagers, he told The New York Times. The cats were likely tolerated because they were skilled rodent hunters, he said. Sooner or later, someone threw a lurking wildcat a bit of food or adopted an orphaned kitten to rear.

Until recently, it was thought that the first domestic cats could be traced back to ancient Egypt. But the 2004 discovery of a cat interred with a human at a Neolithic burial site on the Island of Cyprus changed all that, since the site predates ancient Egypt. Most current evidence points to the domestication of cats as traceable back to the Fertile Crescent in the Middle East.

Today’s house cats descend from the Near Eastern wildcat (Felis silvestris lybica). A recent study indicates that a leopard cat began living with humans in China about 5,000 years ago. The leopard cat is a distant relation of the Near Eastern wildcat, according to Sciencedaily.com. The number of house cats now exceed half a billion worldwide, while the 36 species of wildcats are threatened with extinction. 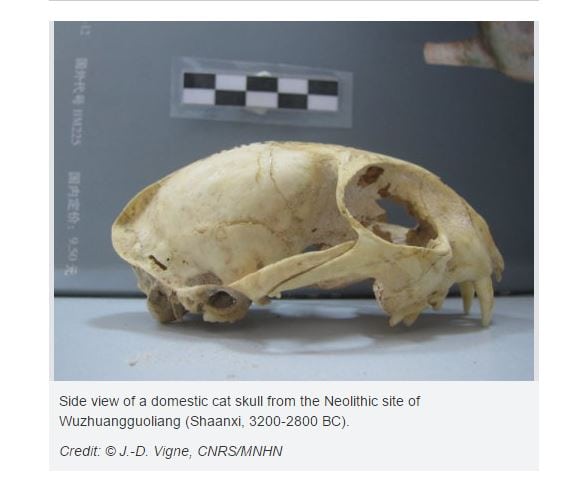 2 thoughts on “Ancient Ancestor of Domestic Cat Chose Us, Not the Other Way Around”