S.O.S. Sea Isle City Cats volunteers were heartbroken to see the condition Sprinkles was in when she returned to them after three years.

Sprinkles recently came into the care of the Sea Isle City, New Jersey group because of a home foreclosure. She was surrendered to the Cape May County Animal Shelter, and the shelter asked S.O.S. Sea Isle City Cats to take her since they could not give her the extra care she requires and it had come to light that she had previously been adopted from the group. She had to be transported in a dog crate and the women of S.O.S. Sea Isle City Cats needed help getting her up a set of stairs.

The sweet four year old cat born to a feral mother, and who they’d previously adopted out, had ballooned to an enormous and crippling 33 pounds, had fleas and ear mites, and had an infection and urine burns on her rear end because she was too massively obese to properly groom herself.

Stacy Jones Olandt is caring for Sprinkles, and spoke with news outlets about the cat. She told the Press of Atlantic City: “She’s sweet, sweet, sweet. I’ve never seen so many people broken-hearted and hopeful at the same time.”

“We’ve seen fat cats at 20 to 25 pounds but this is just obscene. Cats, by and large, don’t overfeed themselves. This is similar to a 600 or 700 pound human that should weigh 180 pounds,” said Olandt.

“Whatever position she’s in, she’s stuck. She can barely move.”

With a smallish frame, Sprinkles should weigh closer to 10 pounds.

Fortunately, Sprinkles is healthier than might be expected, given her condition, and the vet determined that she is not diabetic.

While her caregivers are broken-hearted at the condition she is in, they are hopeful that she can lose some weight and get moving again.

She has been treated for the fleas and mites, is on antibiotics, and has begun a weight loss plan that will help her to lose about a pound a month.

“The veterinarian said if she loses the weight he’ll throw in a tummy-tuck,” Olandt told the Press of Atlantic City.

It is thought that Sprinkles was allowed to free-feed and lacked self-control, or she was given a lot of junk food.

“Many cats live to be 20. She has a good future ahead of her, if she loses weight,” Olandt said.

S.O.S. Sea Isle City Cats is looking for a good home for Sprinkles with a petparent who can provide her with a lot of attention and who will help her stay with a careful weight loss plan. 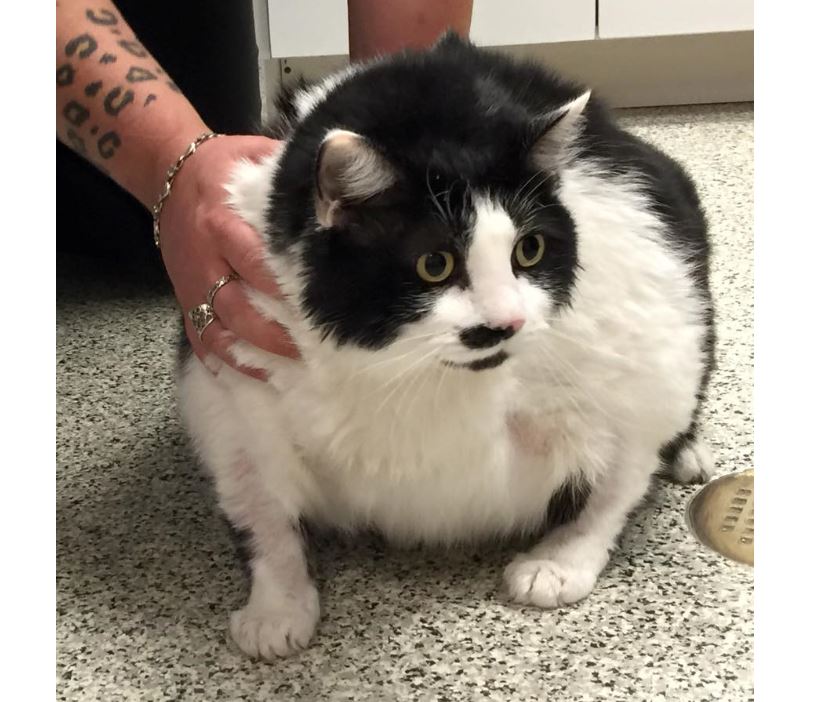