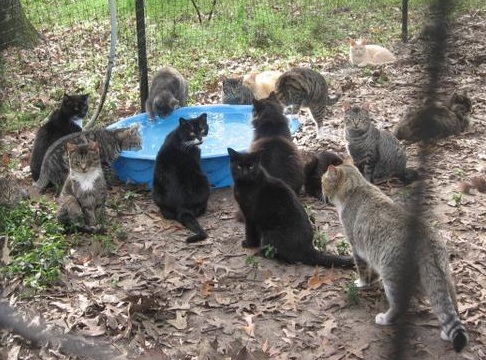 After a dramatic and well-publicised cat seizure two weeks ago, a FL cat sanctuary will close down, leaving homeless cats with one less place to go where they will be allowed to live.

Haven Acres Sanctuary, a no-kill refuge near High Springs FL made splashy headlines last week when nearly 700 cats were removed from the property in a well coordinated plan involving high-profile national organizations, along with local agencies and veterinary help from within the state.

The owners of the cat sanctuary where a record number of cats were removed in a highly orchestrated operation ordered by Alachua County Animal Services have agreed to have their special use permit revoked, as Alachua County officials have filed a notice of intent to revoke the special exception that allowed Haven Acres Cat Sanctuary to operate, Code Enforcement Director Rick Wolf said. “The basis for requesting revocation is because of failure to comply with numerous conditions,” he confirmed; chief among them being the sanctuary’s keeping of nearly 700 cats when they were bound by agreement to reduce their numbers to 200.

Because this point is a zoning issue the sanctuary’s operators, Pennie and Steve Lefkowitz will have to appear before a County Commission hearing, as the property’s use as a sanctuary was approved before that body in 2010.

While the sanctuary was appreciated as a place to send unwanted cats that otherwise might become annoyances for area residents, some neighbors were opposed to it and frequently complained of offensive odors. It was a neighbor complaint that prompted the recent visit by an animal control agent which was used to launch the investigation that prompted the huge cat seizure.

Code enforcement officer Rick Wolf says that at the time of his department’s last visit to the sanctuary in February they were not in violation of the 200 number requirement. Officer Wolf says that occasional odor complaints from neighbors would prompt visits to the property but none of the complaints were ever substantiated by visiting code officers.

Mr. Wolf attributes the jump in number of cats from under 200 to nearly 700 to a sharp increase in the number of cats accepted or dropped off  in recent months. As might be imagined, his office has had to deflect criticism for not keeping closer tabs on the sanctuary.

Alachua County Animal Services director David Flagler agrees with the zoning department assessment of the situation. He notes that cats from beyond the county were brought to the sanctuary, and that not only individuals but also organizations, some from as far away as Orlando, were sending their cats to Haven Acres. He went so far as to say it had become a hub for the greater area. Mr. Flagler further commends the Lefkowitzs on doing an excellent job keeping up with spay and neutering of the cats, and he expresses confidence that on-site breeding cannot be blamed in the explosion of the number of cats at the sanctuary.

All of this points to a situation more complicated than simple hoarding and neglect, with Haven Acres shouldering a larger burden than the one from their own back yard, and dealing with a sharp spike in numbers in a reportedly short time. While we cannot presume to see into the operators’ minds and practices, we know it is possible that they may have been scrambling in a crisis and, as a no-kill refuge, perhaps being wary of handing cats off to others.

We would be interested in hearing reports from people who have seen the cats and who do not have an agenda one way or the other what proportion of the cats are in good or bad shape. That ratio might become somewhat apparent once Animal Services gains ownership of the cats and begins to ship them out and adopt them out. Since the seizure made big headlines and was presented as an unprecedented rescue we think it is fitting that the numbers euthanized versus those sent to rescues or shelters, or adopted out, be made known when the time comes.

Mr. Flagler made a statement last week that cats’ previous families may reclaim them after the County gains ownership, so that will account for some cats, we hope.

While last weeks reports indicated that the goal was to keep most of the cats alive, a recent statement by Mr. Flagler notes that about 40% of the cats have been deemed feral, thus unadoptable. We will be interested to learn what fate befalls those cats; whether they are sent to feral rescue groups, turned loose (not likely, we don’t suppose) or put down.

We certainly hope that the same effort goes into improving the situation for area cats going into the future as went into seizing the cats from and shutting down Haven Acres.

Was it a good place that recently became overrun and overwhelmed, and was done in by warring neighbors; or were  well-intentioned operators simply incapable of running a  top notch sanctuary? Did the sickly and pathetic looking cats seen in seizure photos and video arrive that way recently, or were they allowed to languish for months suffering without proper care? What percentage of the cats were sickly and skinny versus well fed and healthy?  Will the seized cats end up better off now than before? What will become of area cats in the future that might have gone to Haven Acres?

We have had these questions in mind from the time the story hit the news and we are left wondering still. Perhaps further developments will shed some light.

Photo at top taken at Haven Acres well before the recent seizure.