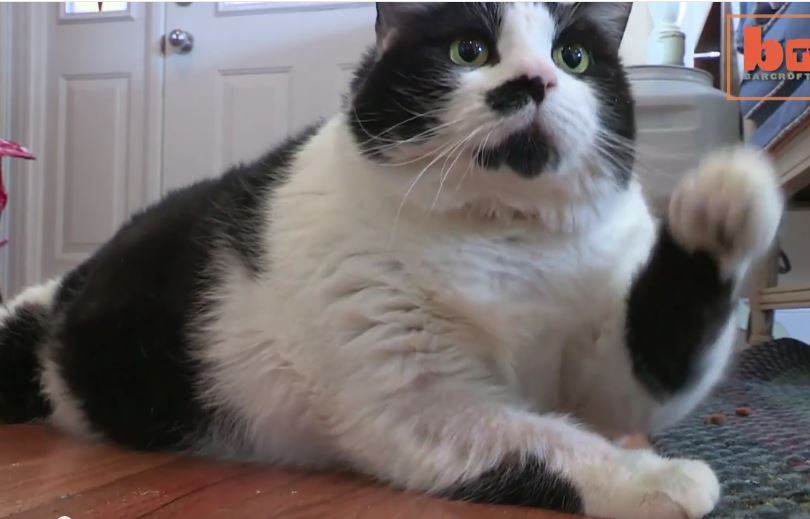 A sweet but terribly obese 4 year old kitty who who loves attention is getting plenty of love and help as she makes progress toward a new, healthier and better life.

S.O.S. Sea Isle City Cats volunteers were heartbroken to see the condition Sprinkles was in when she returned to them earlier this spring after three years.

Sprinkles came back into the care of the Sea Isle City, New Jersey group because of a home foreclosure. She was surrendered to the Cape May County Animal Shelter, and the shelter asked S.O.S. Sea Isle City Cats to take her since they could not give her the extra care she requires and it had come to light that she had previously been adopted from the group.

We first shared Sprinkles’ story on April 24, in our post 33 pound fat cat Sprinkles gets help. Now she is back in the news, with her story being shared to greater exposure by news and media outlets in the US and the UK.

Over the past month, Sprinkles has adapted to her new routines and is making progress in regaining her dignity and her mobility. No longer flea ridden and made uncomfortable by urine burns on her hind end (from not being able to clean herself), she is clean, pretty and learning to move again. She is trying to roll over but is not quite able, so her friends from S.O.S. Sea Isle City Cats give her a bit of help.

Sprinkles didn’t seem interested in eating cat food when she first came back to S.O.S. Sea Isle City Cats, but she has since developed a taste for it. Now that she has re-adjusted to eating cat food, she is being switched to a special diet to help her to safely and carefully lose weight.

Her friends say it will take a year or more for Sprinkles to lose the weight and they feel she would do best in a home where she can  be the center of attention. They feel she must have been starved for attention during the time she was overeating and want to make sure she gets what she needs to be happy when she finds a new home.

You and visit and follow SEA ISLE CATS at Facebook for future updates on Sprinkles, and to learn more about the group’s activities helping their area’s cats.

Watch this  new report on Sprinkles and see her progress:

1 thought on “Update on Sprinkles the 30-plus pound cat”