The story of Corky’s amazing surgery was everywhere this week, but even as the story spread things had changed and he needed to have one of his legs amputated. 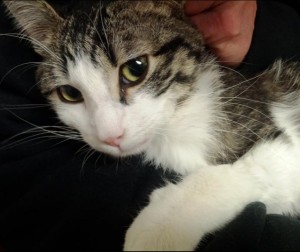 Corky received physical therapy, hydrotherapy and acupuncture, to help him learn to walk normally for the first time in his 7-8 month life, and he made great progress, which was captured in videos.

A problem with circulation and skin issues with his left hind foot and leg persisted despite the second surgery made to deal with them, and on Wednesday Gail Ventzke made an announcement at the Corky Facebook page, saying, “Today’s update is one I have been dreading. As you all know Corky has had some circulation and skin issues with his left foot and leg and today something we have been fearing and dreading has come to fruition. Corky’s foot is no longer viable, it is now clear to us that the circulation will not return and the foot has begun to die, so the difficult decision had to be made to amputate a portion of his left leg.”

Although the problem was with Corky’s foot, Dr. Burchill advised taking part of the leg because amputating just the foot would require further treatment of the leg, with greater recovery time and increased risk of infection.

Corky has his surgery yesterday, and the leg was amputated even higher than originally planned. Corky also had his cryptorchid neuter while under sedation for the leg surgery. Cryptorchid neuter is performed when testicles are not descended.

Gail posted another announcement yesterday after surgery, telling supporters, “Surgery was a success, the cryptorchid neuter was actually more challenging than the amputation. Since his legs were still wanting to cross, it was decided to amputate a little higher up, mid femur, to alleviate any obstacle when he starts to walk. … Corky is recovering with the wonderful staff at Casselton Veterinary Services for a few more days and will hopefully be released to us as early as Monday. That left leg is what has been keeping him in the hospital, now that it has been taken care of we expect a speedy recovery.”

Today Corky was up on his three legs, eating and drinking and doing well. He tried to get up into a standing position by himself but needed some assistance. Hospital staff were pleased with his efforts and feel he will be able to get up fine with practice.

Corky’s remarkable surgery to straighten his legs was groundbreaking and enabled him to walk. Theough there was initial disappointment that he would need the amputation after all, his caregivers from CATS Cradle are looking ahead to the good life he can have as a tripod kitty.

Here is the Jeanne Moos story on Corky that aired on CNN. It does not include anything new for those who have been following his story from the beginning, but rather gives an overview.

1 thought on “Change in Course for Corky”