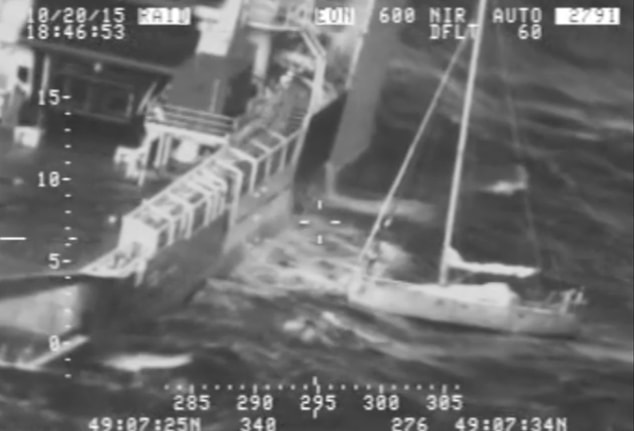 The US Coast Guard rescued a Frenchman and his cat from their 30 foot sailboat off the coast of Alaska Tuesday.

The rescued man has been identified Emmanuel (Manu) Wattecamps-Etienne. He was sailing from Dutch Harbor in Alaska to San Diego, California when he encountered the storm and the battering high waves and had to be rescued from his boat.

The Coast Guard captured raw footage from a C-130 Hercules airplane they had monitoring the rescue as Wattecamps-Etienne leaped from his small craft onto a large boat that had responded to a call for help. On the advice of the coast Guard, the sailor tucked the cat under his clothes as he boarded the larger boat.

Wattecamps-Etienne alerted the Coast Guard using an emergency radio beacon that pinpointed his location about 400 miles south of Cold Bay, Alaska. The airplane was sent out to assess the situation, and its crew made radio contact with Wattecamps-Etienne, who told them his sailboat lost its rudder and rigging in the heavy seas and 46-mph winds.

US Coast Guard Petty Officer Lauren Steenson said: “With the 20-foot seas, his boat is getting pretty well thrown around.”

Steenson added that Wattecamps-Etienne had no control and the boat was “pretty much dead in the water.”

The Coast Guard contacted the Polar Pioneer, an oil drilling vessel used by Royal Dutch Shell, which was nearby. The Polar Pioneer sent its support ship, the Tor Viking, to rescue Wattecamps-Etienne and his cat.

The Coast Guard video from the rescue is not very distinct but shows Wattecamps-Etienne holding on to the rigging pole at his boat’s bow and then making the leap over the waves and onto the larger boat. He landed on the boat head first and then pulled himself on board.

The Tor Viking’s captain said: “We had sent over a harness and a messenger line, before landing the yacht alongside.

“It was agreed that Emmanuel should use the rigged entering ladder, but he took the opportunity when it was there, and got off the yacht.

“If he should have slipped and fallen into the sea, we did have him in the messenger line and harness, able to heave him on board.

“Emmanuel and his cat wasn’t harmed in any way, they are both doing well.”

As of this writing, photos of the cat have not been released.

Watch the US Coast Guard’s raw video from the scene of the rescue: