A family in Phoenix, Arizona spent Christmas Eve searching for a missing cat both in and outside of the home, only to discover that he was stuck in the chimney. “When he went in, he was an almost-white cat and now he’s black as soot,” Adrienne Gill told NBC Channel Twelve.  Gill’s daughter was visiting from California and brought along her newly-adopted cat she had named Santa Claws. Everyone settled down for a quiet evening after making sure the house was buttoned up so the cat couldn’t get out. Then something odd happened, according the the NBC report. “He vanished into thin air,” Gill said. “This room is so large, you could hear a pin drop and we didn’t hear a peep from him.” 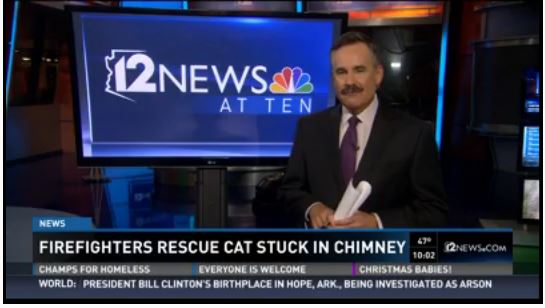 After hunting high and low for the cat into the wee hours, the search was abandoned until Christmas morning when Gil’s husband, Peter Burt, decided to check out the chimney. “I took a bulb, took the shade off and stuck it up there and took a mirror and I could see the cat,” Burt said. “So that was nice, he was right where I thought he would be.” Burt was relieved, and maybe just a bit exasperated. The Fire Department was called and the rescuers arrived and got to work. “I mean, to see two of these big firemen in there putting their arms up there into three inches of space,” Burt said. After about 20 minutes, the cat was out of the chimney and back in the arms of his owner. The local NBC affiliate showed up to video the rescue and interview the family. “Crazy!,” Gill said. “What a way to spend Christmas, right?”