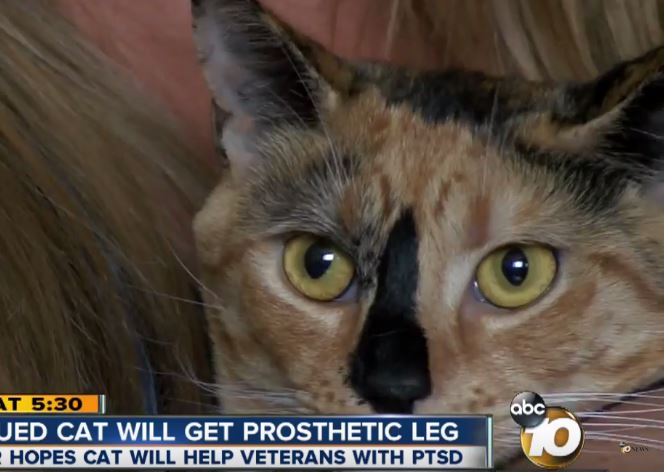 Sophia the cat’s petmom is hoping she will one day become a therapy cat for wounded veterans and those with PTSD.

Karolyn Smith, a U.S. Army sergeant and San Diego, California resident, adopted two cats, Sophia and Leonidas, from the Humane Society together. Sophia had been born with her umbilical cord wrapped around one of her paws and had to have the leg amputated when she was only weeks old.

Smith said she had no qualms about adopting Sophia because she has friends who are amputees. Making the connection between Sophia and her amputee friends, and considering the calming power of cats, she was then inspired to help other vets.

“What about, if you can put something in your home that’s going to release this natural chemical helping whatever your therapy program is, what if that’s a kitten?” said Smith, who cites the soothing effect of oxytocin, which can be released in the brain by the sound and vibration of a cat’s purring.

Smith said she hopes to make a Sophia a therapy cat who can help veterans with PTSD.

Sophia is scheduled to get her prosthetic leg this week.