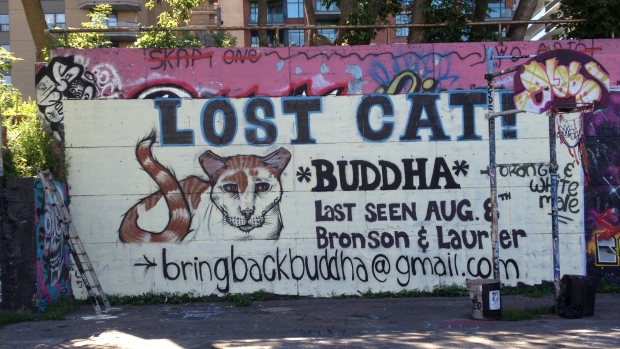 A woman and her friends have created the ultimate missing cat poster in hopes of getting help in finding her lost cat. They have painted a large mural in a downtown area near where Buddha disappeared.

Buddha went missing on August 8, shortly after moving to Downtown Ottawa, Ontario with his petmom Kayleigh Julien. Kayleigh posted a lost cat notice at kijiji but went much further in getting word out when she and some friends created the large mural seeking help in locating Buddha and getting him back.

The eye-catching mural, on a wall previously decorated with some colorful graffiti on a raspberry pink background, includes a good representation of Buddha, a hard-to-miss banner reading ‘LOST CAT,’ and pertinent information.

Kayleigh rescued Buddha two years ago when she was living in nearby Gastineau and he was not faring too well living the tough life of a stray in a cold climate. She is quoted by CBC News saying: “I’m afraid people might think he’s a stray because he used to live on the street for so long. He was out for an entire winter at one point. He had frostbitten paws when I took him in. I had to nurse him back to health.”

Buddha’s kijiji ad reads: Wanted: MISSING CAT- BRING BACK BUDDHA: I just moved and my cat Buddha has been gone since August 8, 2014. He is mostly white with an orange patch on his face, and orange on his ears, head, tail and patches on his upper and lower back. His eyes are a yellowy orange. His ears are also rounded from previous frostbite. He used to be a stray and has specific food needs, etc. With the weather being cooler I am getting worried. Really hoping to get him home. Any information call 613-883-5295.

Buddha was wearing a leopard print collar when he disappeared.