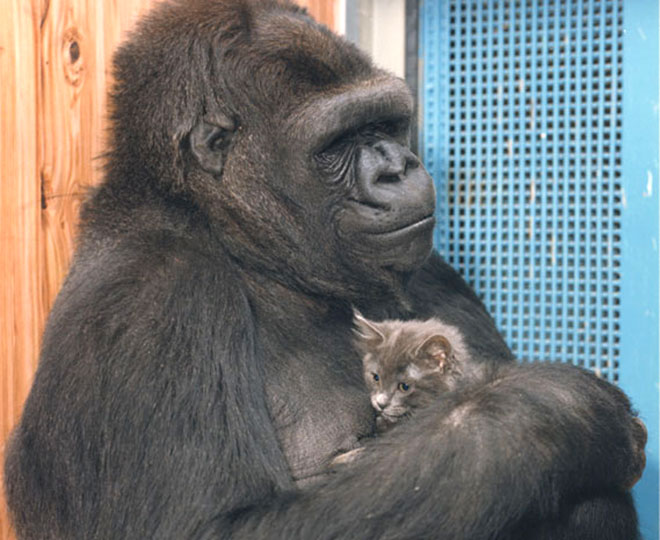 The gorilla who learned how to sign over 1,000 words and had a fondness for kittens has died at the age of 46. Koko came into prominence when she demonstrated high levels of comprehension, decision-making, and understanding through her work with Dr. Francine Patterson. Born in the San Francisco Zoo, she was taught American Sign Language, through which she communicated including her observations and feelings.

The second cover, from 1985, showed the large western lowland gorilla cradling a kitten. Koko had asked for a kitten for Christmas in 1984. Her caretakers gave her a stuffed animal, but that didn’t work for the gorilla who told her human family that she was sad that she didn’t get a real cat, The Los Angeles Times reported in 1985. So on her birthday, she was allowed to chose one and became famous being a gorilla who had a kitten as a pet. Researchers said that Koko would cradle and pet the small cat, while the feline would treat Koko like a human. Like any cat, she was independent, and would bite, or get loose when she had had enough love from her gorilla caretaker. When that happened, Koko would sign “obnoxious cat.” But when the kitten, whom Koko named All Ball, wanted affection, Koko would sign,“soft, good cat.”  Koko and All Ball’s family came to an end, though, when the cat wandered into a road and was hit by a car. Koko signed about death after the kitten was killed and cried, mourning her pet, the Times reported.

The following Press Release came from The Gorilla Foundation:

Woodside, CA      Koko — the gorilla known for her extraordinary mastery of sign language, and as the primary ambassador for her endangered species — passed away yesterday morning in her sleep at the age of 46.

Koko touched the lives of millions as an ambassador for all gorillas and an icon for interspecies communication and empathy. She was beloved and will be deeply missed.

Koko, a western lowland gorilla, was born Hanabi-ko (Japanese for “Fireworks Child”) on July 4, 1971 at the San Francisco Zoo. Dr. Francine “Penny” Patterson began working with Koko the next year, famously teaching her sign language. Dr. Patterson and Dr. Ronald Cohn moved Koko and the project to Stanford in 1974 and went on to establish The Gorilla Foundation. While at Stanford the project expanded to include a second western lowland gorilla, Michael. In 1979 Koko and The Gorilla Foundation moved to the Santa Cruz Mountains where Ndume joined them as a fellow ambassador for their species.

Koko’s capacity for language and empathy has opened the minds and hearts of millions. She has been featured in multiple documentaries and appeared on the cover of National Geographic twice. The first cover, in October of 1978, featured a photograph Koko had taken of herself in a mirror. The second issue, in January of 1985, included the story of Koko and her kitten, All Ball. Following the article, the book Koko’s Kitten was published and continues to be used in elementary schools worldwide. Her impact has been profound and what she has taught us about the emotional capacity of gorillas and their cognitive abilities will continue to shape the world.

The foundation will continue to honor Koko’s legacy and advance our mission with ongoing projects including conservation efforts in Africa, the great ape sanctuary on Maui, and a sign language application featuring Koko for the benefit of both gorillas and children.