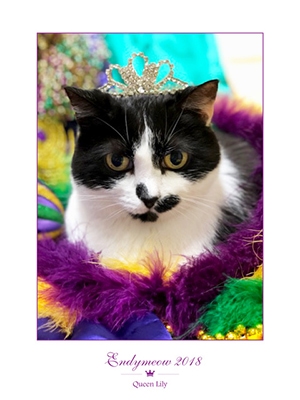 Veterinarian Mark Cousins created Endymeow several years ago as a way to celebrate all things feline during the Carnival season. With dogs already having their own organization, Barkus, it seemed appropriate that cat population get the same royal treatment.  Originally, it began with The Cat Practice parading cats in their crates through the neighborhood.
“We thought we could put cats in cages and parade them down the street,” Cousins told The Advocate. “They thought that was stupid.”
These days, the cats aren’t required to attend. Rather, owners submit photos of their prospective kings and queens dressed in their Mardi Gras finery, for consideration during the highly secretive selection process. The court is then announced at a people-only cocktail party.

So, as they say in New Orleans, laissez les bon temps rouler!