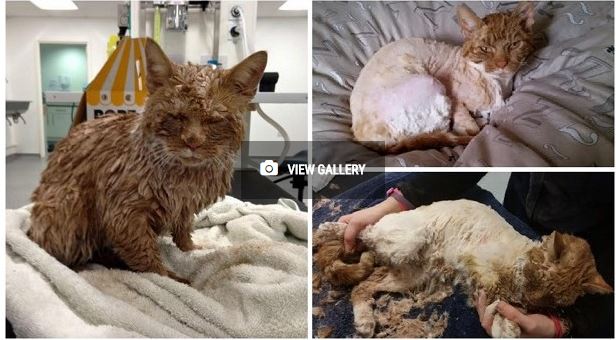 A cat covered in wet concrete is making a good recovery after a homeowner found him huddled on her doorstep. Faye Richards of Bristol said at first she thought the tabby was “a ball of brown parcel tape that had been blown onto my front step. It was only when I got closer I realized it was a cat.”

The vets who treated the cat named Grant said they were concerned that the ginger tabby was the target of a malicious prank, according to reports in the Bristol Post. Concrete powder is toxic to cats. Richards told the Post that the concrete had begun to harden on the cat’s back but his belly was soaking wet. Grant could barely open his eyes, she said.

She rushed him to a pet hospital in Hengrove where veterinarian Adam Sheridan began removing the hardened clumps of concrete from Gran’ts horribly matted fur. “Most of his top coat was covered in concrete and it was matting together,” he told the Huffington Post. “We attempted to groom as much of he fur as we could, but we had to take the decision to shave him.” 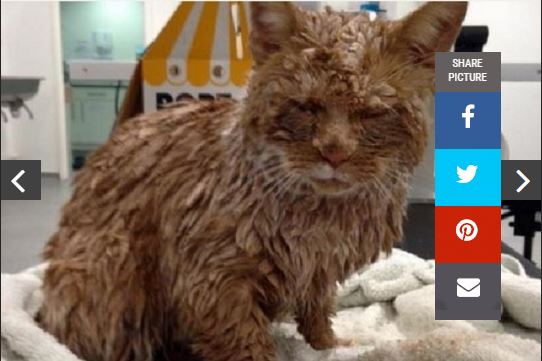 Grant is being watched to see if he shows any effects of having ingested or inhaled the toxic powder, Sheridan said. “It is a case of waiting to see any signs.” Sheridan told the Huffington Post that he took the cat home for the weekend to keep an eye on him. “He is an adorable cat. He was very subdued and quiet when he first came in, almost certainly due to the trauma. But he has made big improvements over the past couple of days. He is very friendly and charming, and has mostly been catching up on his sleep over the weekend. We have got most of the concrete off, but there are still little clumps which we can’t get to yet.”

Vets say the pattern of concrete on Grant’s fur suggests it was poured over him, and he did not have any concrete on his paws. Sheridan said it is highly unlikely a cat would walk into fresh concrete. ” The Huffington Post reported that several people have come forward to claim Grant, but Sheridan said he wants to figure out who be belongs to “and whether it is safe for him to go back. We will definitely make sure he goes back to a good home.”