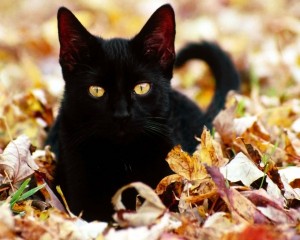 Black cats seem to have a bad rap, particularly around the month of October, but it isn’t restricted to then.  Truth be told, in terms of luck, for the most part they seem to land with all four feet on the positive side of things.

The cat’s association with luck is tied back to historical thought on their cultural position.   In early Egypt, cats were considered deities, even worshipped, so much so records have shown mummified cats having been laid to rest in family tombs and with royalty.  The Romans were also big fans of felines.  However,  it wasn’t until witchcraft became all the rage in Europe during the middle ages that cats, and black ones in particular, became the harbinger of all things evil.  Those who were most conveniently accused of practicing witchcraft were older women, who for the most part lived by and kept to themselves.  They were also recognized as the original old world cat ladies as many a crone had a perceived propensity to be in the company of feral cats, leading to the animals becoming equally suspect.  Fear of little old ladies practicing black magic begat fear of little old ladies feeding cats and as cats, by nature, were (and are) characterized as intelligent, cunning, aloof, swift, and able to disappear without a trace, therefore they are the very embodiment of something-wicked-this-way-comes.  To the ill-informed or easily swayed weak-minded go-along black magic was easily manifested in the form of a black cat.  For many that seemed to be a reasonable explanation.

Suffice to say, that was not a common belief among all societies and groups.  It was an old tale that should a sailor’s wife keep a black cat it would insure her husband return safely home. As to those on the seas themselves, pirates (among others) believed a cat walking toward you was bad luck, but walking away was good indeed.  Sailing onward to the East, many Asian cultures thought owning a black cat to be very lucky.

There are also a lot of superstitions that seem a bit contrary if taken all together.  For example, it can be considered bad luck if you happen upon a black cat, but good luck if you meet three in succession.  If you are in the United Kingdom or Japan a black cat crossing your path is always a blessing, but in the United States, not so much.  Dreaming of one, and likewise dreaming of white cats, is an excellent sign and if you meet a black cat that has a white hair, then it will definitely be your day. The Scottish believe a black cat appearing at a home is very fortunate, but if you kill a cat in Ireland, it will bring you seventeen years of bad luck.  Beware visiting the Netherlands and engaging in a private conversation with a cat in the room.  Apparently black cats are terrible gossips and will let the neighborhood know your business.  And next time you are in Italy listen for a cat to sneeze to improve your situation.  All that said, the proliferation of black cats on merchandise and in advertisements throughout the Halloween season around the world continually reinforces the black cat is a bad cat mentality for some people. Seems a pity, too, with the preponderance of luckiness they seem to bear elsewhere.

To put superstition into perspective, it holds true that no matter where you are in the world there is likely to be some folklore about black cats that falls to both sides of the fence.  What it really bubbles down to, whether employing use of a cauldron or not, is your personal belief with regard to felines and their unique relationship with people.  Undoubtedly, if you are a cat lover, you know, firsthand, you are lucky anywhere you may be in the world if you have a cat who loves you.