When Emma was in a dark place, the little black dog in the window stole her heart. What she didn’t know at the time was, in spite Sid’s having come from a puppy mill, something Emma knew little about and has since become informed, he was a gift beyond her expectations.  She had wanted a best friend, someone to help her past the depression and agoraphobia that plagued her.  Though he came to her complete with many of the requisite issues conducive to his breeding, including scared to be touched, brushed, have a collar placed on him, other dogs, and particularly men, together, the pair worked through their challenges, Emma sharing that Sid has brought, and continues to bring, joy into her life every day. Still, of his own accord, Sid took things further than Emma could have imagined. Having worked through his own demons, Sid has become a happy, confident dog, who loves the dog park, guests coming over for BBQs, even men, for whom he will often sit eagerly awaiting their arrival with his trusty rubber chicken in tow. He has also become quite the kitten super nanny, something which Emma never saw coming. 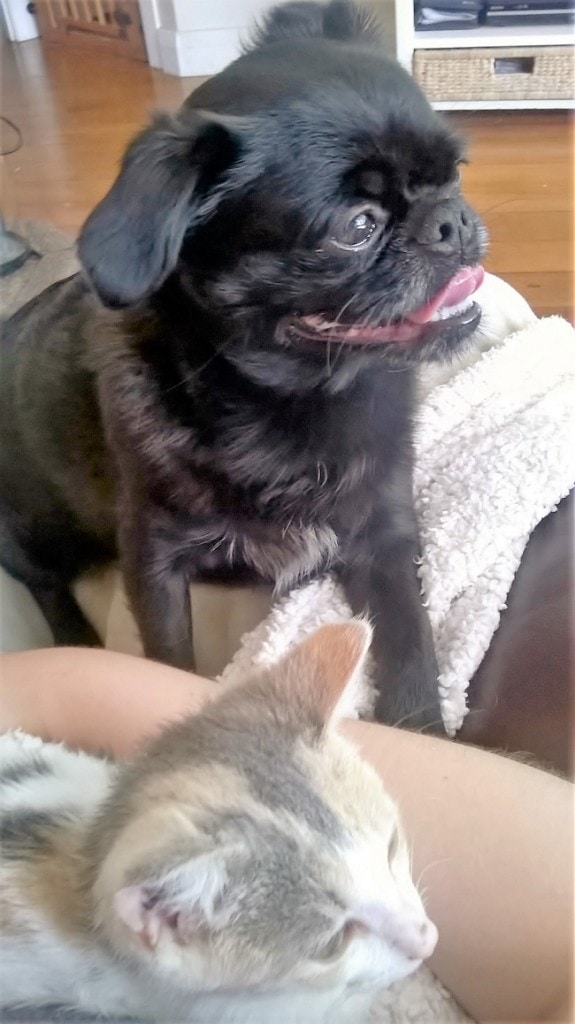 When Emma’s Gran’s elderly cat passed away, the family adopted a new kitten from Kelleigh Rudolph who runs M.A.D (Mission Animal Desexing) in Manurewa, South Auckland, someone whose work Emma greatly respected. When Kelleigh reached out several months later needing fosters to provide a bit of space and a lot of love, the family offered to help.  While the initial fear of fostering was touched with a bit of worry over it being difficult to give the kittens and cats away, the trade-off, knowing they would be going to a good home, made the decision to participate worth it.  Apparently, Sid saw it in a similar way. 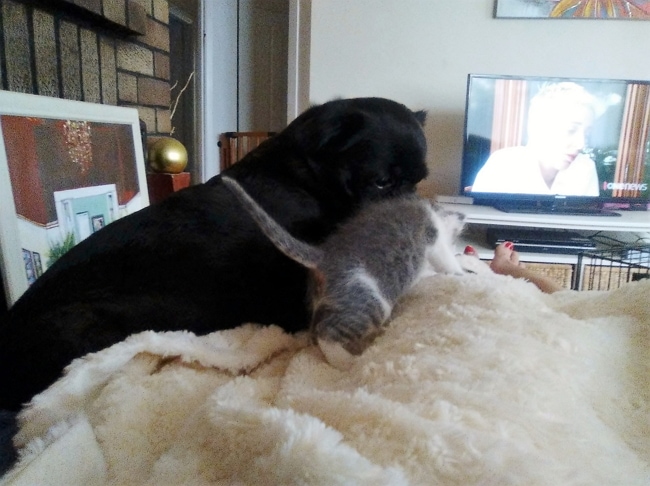 When the initial trio of wild kittens arrived, Emma said, “Sid was OBSESSED and would sit outside the barrier to their room with his rubber chicken, play bowing and desperate to meet them.” When the litter left, Sid whined incessantly.  Kelleigh shared the cat rescue charity 9 Lives Orphanage was in desperate need of fostering help and put Emma in touch with Alisha and shortly thereafter, another litter came along.  Little by little Sid became more involved with the kittens, his good behavior rewarded with kitty visitation. 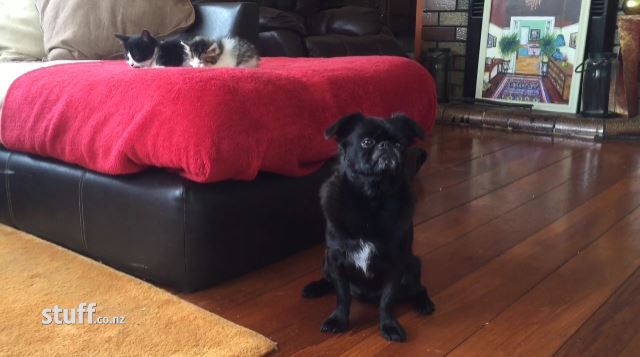 “Over time we’ve developed our introductions down pat, he has something magical about him that is very calming to cats. We’ve had wild kittens that are grumpy and stubborn and refuse to be loved, purring within seconds of meeting him! And adult male tom-cats that are bigger than he is, find a companionship and gentleness while in his presence.” In asking Emma if she had any concerns with bringing fosters into the home, she admitted she had some reservations. “I had a little set up for (the kittens) next to the sofa as we were doing feeds every hour. I called Sid to bed but he decided he wanted to sleep next to them instead. Knowing they were safe in the crate and that I’d be up in another few hours I let him sleep next to their crate. A few hours later I came back in and HE HAD UNLATCHED THE CRATE and had curled himself around them. Most of them were asleep on top of him, nuzzled in and he was grooming them. He looked up at my happily, and sleepily wagged his tail. It looked like he was in a post-birth euphoria to be honest.”  The kittens became so bonded they tried to feed from him, which Sid took very seriously, and although he was unable to sate them where that hunger was concerned, he did teach them how to each solid food (taking a small mouth full then encouraging his charges to do likewise), assist with toilet training, and make sure they were clean “tip to tail.” When one of them cries, Sid is right there to offer comfort, and it seems the kittens know and expect it. Emma was holding a little kitten that was not long for the world and the last thing it did was look at Sid right before dying, almost as a thank you for his kind care. When another died, Sid seems inconsolable. The family buried the kitten and had some concerns that Sid may try and dig it up in an attempt to revive it. However, the little Brussels Griffon lay across the tiny grave for over an hour, as if making sure, even in death with the rain pouring down, it was safe. 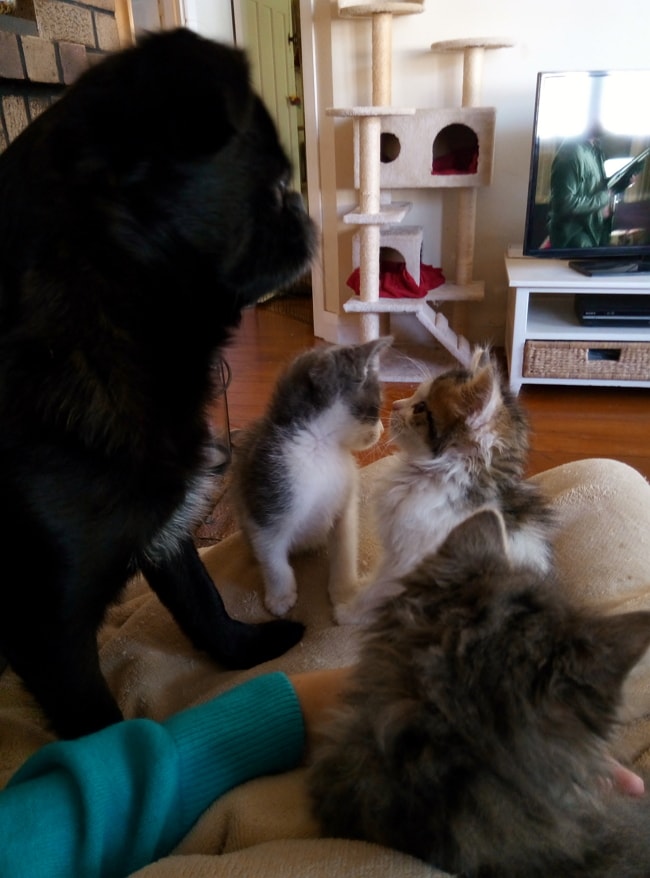 Sid’s talents don’t stop with his nanny skills either.  A proficient skateboarder and basketball player, he is even adept at communicating with some sign language. As Emma has multiple chronic illnesses, including a condition that involves fainting, Sid knows how to alert the others in the house.  One occasion, Emma recounts had her walking around the block, then suddenly collapsing.  Sid ran all the way home, leading help back to her side. 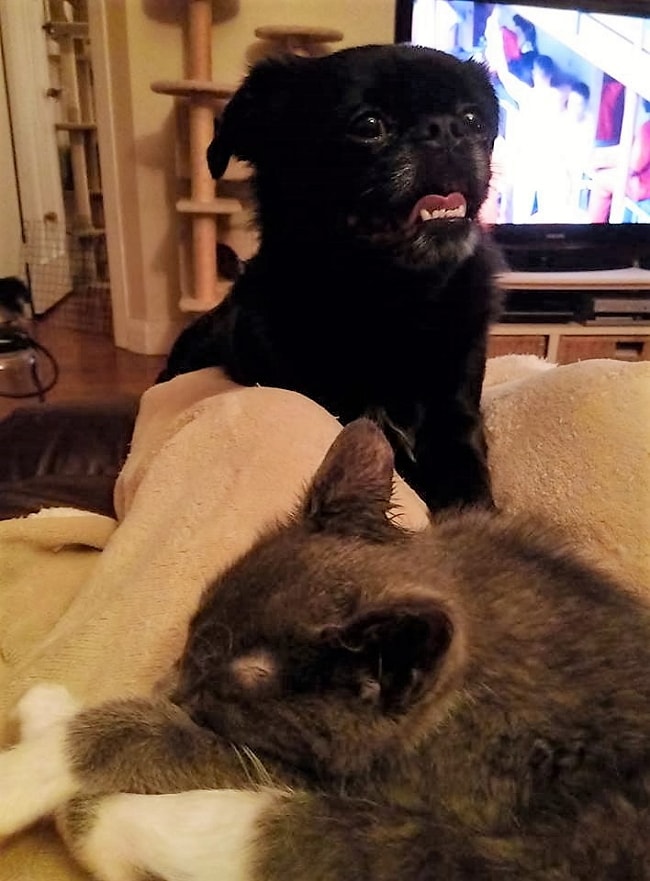 In addition to his beloved rubber chicken, a gift he bestows on those with whom he is particularly taken, Sid has a little buddy, Oscar, and although, as Emma puts it, they are “different as two sides on the same coin,” the pair are extremely close. However, in spite of that, big brother Sid is quite reserved with Oscar’s making the acquaintance of kittens, tempering his junior for a week or so before permitting access, being the over protective fellow he is with his miniature entourage. Six cats also live on the premises. Alfie, the original kitten adopted from M.A.D, and Boo live with Gran, Emma’s folks have Joan Jet and Gigi, and Emma has her therapy cat, Lucy, and Minnie, a foster that has become part of the clan. Sid is an amazing little dog and Emma could not be more appreciative and thankful for his role in her life. To have a best friend that can be a comfort through her own chronic illnesses, coach and big brother to Oscar, pal to the family felines, and super nanny to the foster kittens that come through, is more than she could have ever hoped when looking through the window at seeing that little black dog for the very first time.

Please click on white area above timeline to view video. 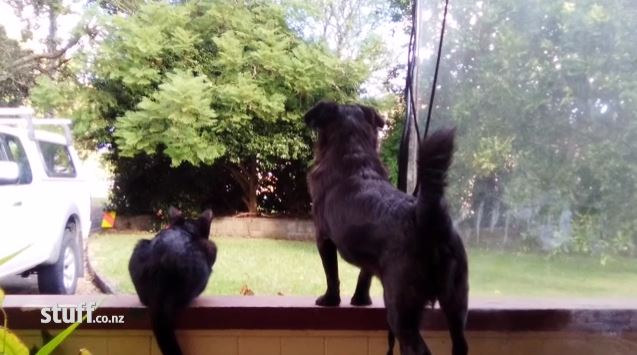