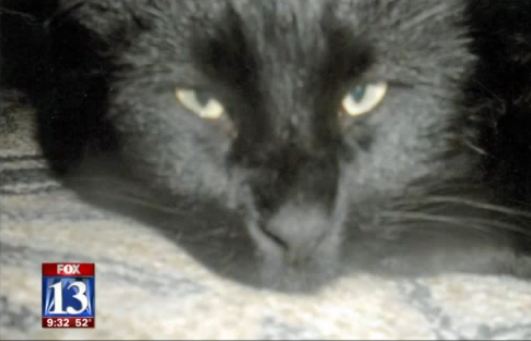 The heartfelt letter to the editor of a brokenhearted boy expressing his grief and asking for answers over his missing cat’s accidental killing at a shelter has gone from a small Utah paper to media outlets across the US and UK.

Rayden Sazama is an 8 year old boy from Logan, Utah. On Thursday, the Herald Journal published a letter he dictated and his grandfather helped him write. The letter drew comments online and led the Associated Press to cover the story of Toothless the cat’s unnecessary and accidental death, and Rayden’s compelling letter and the public’s response. Public response has ranged from sympathy to criticism of the shelter for the killing and the family for allowing the cat outside.

After introducing himself, Rayden said in his letter, “Yesterday grown-ups killed my kitty, my best friend, when they weren’t supposed to.” He then told about Toothless and what made him special to Rayden and his 5 year old brother, Devin.

Toothless, who was named for a character in a children’s movie, went out the cat door on Friday, September 28. The fluffy black cat liked to visit a cow pasture next door to his home. Toothless didn’t come back home, and on Sunday Rayden and Devin went door to door asking if anyone had seen him. According to what they were told, no one had. After learning nothing by going door to door, “we were worried and scared something was wrong,” the boy wrote.

Someone had seen toothless. A neighbor who supposedly did not like Toothless pooping in his sandbox trapped him and had him taken away, then lied to the boys when they asked him if he’d seen the cat.

The boys’ Dad Jason Sazama checked the Cache Humane Society’s website but didn’t see Toothless among the cats listed there. After two busy days out on the road for work, Jason stopped at the shelter in person on Tuesday* evening. Though he arrived after closing time, a shelter staffer let him in, and there sat Toothless in a cage. Rayden describes the moment, as told to him by his father, “He was curled up laying in the back of the cage very scared. When my dad made his funny meow sound that he does to make him come home, Toothless jumped up and came to the screen and rubbed up against it and was so happy to see my dad, and he wasn’t scared anymore.” Jason was told he couldn’t take Toothless home because he needed to pay an impound fee to an office that was closed for the night. The staffer promised to put a note on the cat’s cage, and Jason returned home to deliver the joyous news to his family, that Toothless was safe and would come home the following day. The staffer was busy training a new employee and forgot to put the note on the cage door. When Jason returned with his receipt the next day, Toothless was gone. The five day stray hold was up and, with no note on the door, the cat had been killed.

The woman who had forgotten to write the note that should have saved Toothless’ life admitted her mistake and said she was sorry for the deadly error. Rayden said, “She had just forgotten to write a note to save a member of my family. They killed him and I don’t know why.”

Rayden’s letter comes to a heartrending conclusion that shows an innocent child’s confusion and disillusionment, along with palpable grief. “My dad found out where he had been picked up and it was our neighbors down the street that don’t like cats and dogs. They had caught him in a trap and gave him to the police to take him away. When Devin and I knocked on their door and asked if they had seen Toothless they told us no, and that was a lie. My dad and mom tell me and Devin not to lie and that is right. I didn’t think big people lied because they are grown ups and know what is right. Now I don’t know what to do. My cat Toothless is dead; the people that killed him didn’t even give him to my dad so we could bury him. What do I do now?”

Neither of Rayden’s parents show anger or place blame with the shelter; they say the killing was a sad accident. Rayden’s Dad Jason Sazama takes some of the responsibility on himself for not visiting the shelter in person sooner, before Toothless’ 5 days were up. Jason said the letter was not intended to criticize the shelter but to give Rayden some closure by writing his thoughts and feelings about the loss of his beloved pet and the sad lessons learned about duplicity and human error. Jason said he didn’t know Toothless was being a bother to the neighbor, and also said he regrets not getting Toothless microchipped.

When asked about the public response and discussion his letter brought, Rayden told the AP, through Jason, on Friday, “I just wanted to tell people about Toothless – that I loved him, and that people shouldn’t lie.”

To read Rayden’s letter in full at the Herald Journal, of Logan, UT, click HERE.

*The AP report says Jason found the cat on Tuesday evening. Rayden says it was Wednesday in his letter.