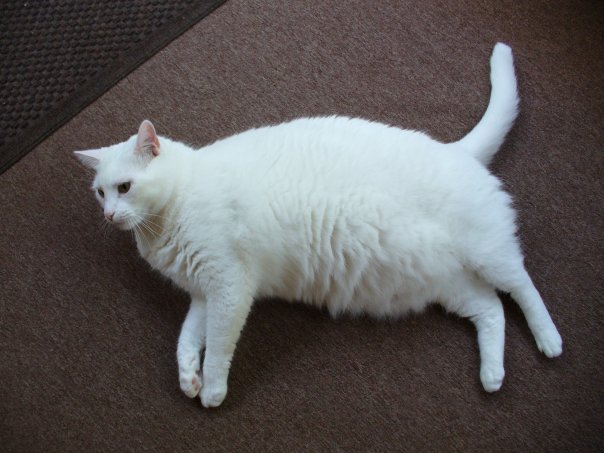 When a hawk carried off a NYC cat in recent days  his 15 pound weight saved him.

Eddie the cat’s petmon heard a commotion outside of her Upper West Side apartment, went out of investigate and was disturbed to find fur, broken nails and feathers on the ground.  Worse, she heard the hawk’s screeching and Eddie’s meows.

Eddie was carried off by the four pound Red Tailed Hawk, but eventually his heft won out and the bird of prey was forced to drop him. He is thought to have dropped a distance of about five stories, and was found, disoriented and frazzled in the back garden of a nearby apartment building. The resident says he heard a thud and came out to find his garden umbrella knocked over and a cat mewing in a corner.

Eddie’s mom was understandably distraught after her cat was carried off; searching the streets of her neighborhood for his body and putting up flyers. The unnamed woman says Eddie has been a wonderful companion in the four years since she moved to Manhattan and adopted him from the ASPCA.

Eddie was seen by a vet and found  only to have some bumps and bruises for injuries, and was pronounced “an amazing cat” by the vet.

There has been a disagreement in recent days in NYC over whether a hawk can or would actually carry off a cat. That question seems to have been answered now.

Photo is of Cracker standing in for Eddie