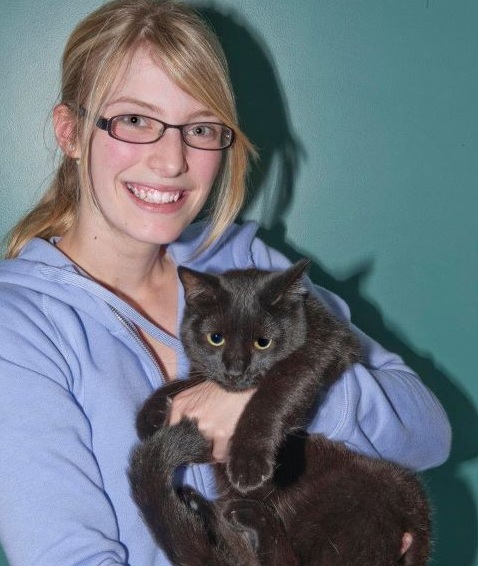 Sleek, black cat “Kitten” ran off from his Mill Bay, Vancouver Island BC home, in May of 2010 while recovering from an injury, and as time passed Melissa Van Kesteren thought she would never see him again. That changed last Saturday when the two were reunited thanks to a good Samaritan, a Nanaimo BC veterinary hospital, and the Identipet ear tattoo program. In a tidy coincidence, the tattoo identification program was started at Island Veterinary Hospital, where Kitten was identified, and from there spread throughout Vancouver Island, enabling Kitten to have his tattoo.

Kitten had somehow travelled from Mill Bay to Nanaimo. Both communities are situated on Vancouver Island, just north of US Washington State, along the coastline of Georgia Strait, with a direct route between them, along Canada Highway BC-1, of about 77 km, or roughly 48 miles. Melissa had gotten Kitten as a tiny fluffball, in 2009. In 2010, he was hit by a car and received veterinary care for a broken jaw and tooth. He went missing the day before he was scheduled to return to the vet to have staples removed.

Melissa put missing cat posters all over her local area to no avail and finally gave up on Kitten, thinking he had once again been hit by a car. She was thrilled and surprised to get the call on Saturday telling her that Kitten was alive and well and living in Nanaimo.

Kitten had been observed hanging around a Nanaimo by a woman who started feeding him and then took him to Island Veterinary Care for a checkup; that’s when he was identified.

On September 17, the vet that discovered Kitten’s identity and reunited him with his person, Island Veterinary Hospital of Nanaimo, BC, posted its own “Homeward Bound” story on the saga of Melissa Van Kesteren and her cat Kitten at the hospital’s Facebook page :

“An adult black stray cat was hanging around residences in Labieux Road for some time. Out of pity a local resident, began to feed it and finally allow him into her life. Her efforts to find out who the cat belonged to were to no avail and she finally decided to bring the cat to the Island Veterinary Hospital for a check over.

As a young adult, it was apparent that someone loved him at one time as the cat was neutered and was missing an upper large canine tooth. An investigation with an otoscope light into his ear discovered a tattoo indentification tracing to a veterinary hospital in Mill Bay. A quick call there and we were told the phone number of the caregiver. The phone call started with a quick “You are kidding, right,” and then screams of happiness and tears. As it turns out ‘Kitten’ had been missing for a year and four months (that is equal to about 10 human years) and how he ended up in Nanaimo is anyone’s guess … and Kitten isn’t talking. Kitten’s owner (Melissa) said she had given up hope of her cat returning. He had been hit by a car at one point and she repaired his broken jaw and had a broken tooth removed. Shortly after Kitten went missing she discovered she herself was pregnant and already has a toddler at home who has never met his mom’s beloved cat.

The tattoo identification program, Identipet was initiated by the Island Veterinary Hospital in cooperation with the SPCA and local veterinarians. The program has since been adopted around the province and has enabled thousands of lost pets to be reunited with their caregivers. Keeping a phone number and address current with your veterinarian is important for the tattoo tracing program to work.”

Kitten did not seem to recognize Melissa at first, but is said to be happily readjusting to life back at his home. Melissa says that Kitten will be an indoor cat from now on.