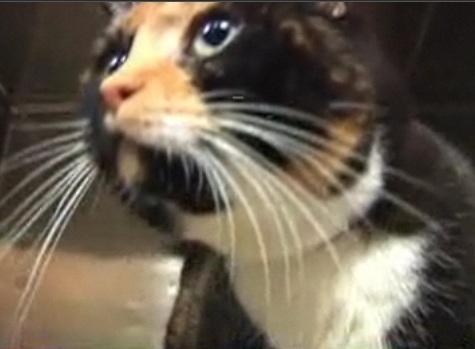 The mystery of how a Colorado cat who went missing five years ago turned up this week at the Manhattan, NYC ACC may be partially solved. Gothamist reported a tip yesterday confirming the likely scenario, that a New Yorker on a ski vacation picked up the ostensible stray and flew her to a new home. According to the tipster, Willow was known as Molly after she became a New Yorker.

The tipster, who says she was Willow/Molly’s petsitter, said of the cat,  “She was brought to the shelter by someone who loved her very much, but was unable to give her all the time and attention she deserves.”  In its original statement on the case, ACC said the man who brought Willow to the animal control facility clamined to have found her on the street.  If the tipster’s story is valid, that would mean the man who dropped Willow off had given a false story, which is not unlikely. Gothamist includes a photo of a cat who looks very much like Willow in its story on the scoop.

Other questions remain, still. Willow is said to have been checked and vetted before flying from CO to NY to assure that she was not being catnapped, yet her microchip quickly identified her family when ACC took her in. It also remains unknown whether the cat had one or more owners in New York.

While we cannot confirm the accuracy of the tip, which was also reported on in today’s NYT City Room Blog, the most likely explanation for how the beautiful, well fed and healthy looking calico made her way across country is that someone brought her via car or plane. The explanation to this perplexing case raises more questions than it answers, yet it does provide some resolution.