There are two stories to be told in the wake of the massive Whiskerville cat seizure of Jan. 3. There is the story of Wydell Dixon and how she operated the facility, and  there is the story of the cats who were saved. Here, we follow up on the saved cats and how they are being helped. 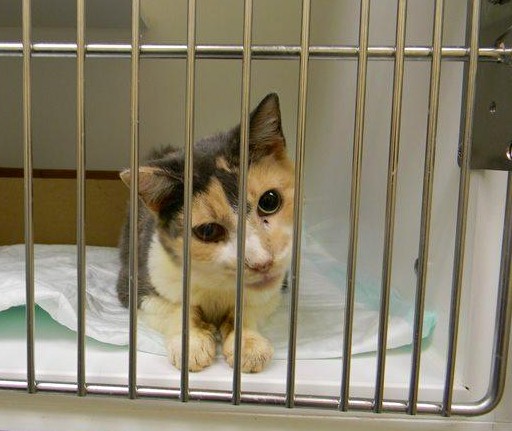 Texas City, Texas police and Animal Control personnel rescued close to 200 live cats and brought out 27 dead when they raided Wydell Dixon’s Whiskerville Animal Sanctuary on Tuesday, January 3. The raid was prompted by a call from a neighbor after she peered in the window of the old commercial building and saw a disturbing sight. Whereas several cats would usually come to the window to greet her, this time only two came, and the rest of the cats seemed to remain, oddly, in a circular group on the floor. The cats had been left to fend for themselves for an extended period, and authorities made the rescue after obtaining a civil order. The Galveston County Animal Shelter has primary responsibility for the cats and currently houses most of those saved at their excellent new facility. Especially sick cats were taken to Scott Vet, a local practice that has provided medical care for the worst cases. Of the 17 cats initially taken to Scott Vet, 3 died and the others have since returned to the shelter. Veterinary personnel easily disputed the Sanctuary owner and caretaker’s claims about the length of time the cats were left uncared for, based on simple observation of the state the animals when found. They had feces caked to their fur and urine burns on their paws, and were so malnourished that their nails appeared to be extended because they had lost so much body mass. These visible signs conflict with claims that the cats were only left alone and uncared for for a week or two. The revolting state of the sanctuary building supports those observations. The influx of more than 150 cats has strained the capacity of GCAS, so some cats are being fostered, while others have been sent to the Galveston Island humane Society and the Houston Humane Society. Most cats remain with GAS, where they are receiving rehabilitative care. In addition to their food and shelter needs, the cats need to be cleaned and groomed and to be socialized. Staff and volunteers spend hours and hours trying to gently restore the cats to a clean and well-groomed state, brushing them and running baby wipes across their fur.  GAS posted this at their Facebook page on January 8, “We are in need of a groomer who would be able to work on a couple of the more heavily matted longer haired cats. A lion cut may be in order. We had some volunteers yesterday with the patience of Job who worked on a few of the cats with combs, brushes, ear cleaner, baby wipes etc. but still some of the cats will require professional care. Thank you. And thank you again to the volunteers who have been working so hard. You are amazing.” To help with socialization and to help normalize the animals after the horrors they endured while left to themselves, starving and surrounded by filth and death, they are taken into community rooms where they can roam, interact with one another, and benefit from some human companionship. GAS staff and volunteers say that many of the cats appear to have been well socialized once, while a smaller number of others are aloof or semi-feral. The consensus is that the Whiskerville cats are sweet darlings who will make wonderful pets once they are restored and rehabilitated and, hopefully, are released from Wydell Dixon’s ownership and made available for adoption into good homes. Cat lover Joan Addison, who lives in a neighboring county, is in close contact with those helping the Whiskerville cats and has set up a ChipIn for the Whiskerville Cats to make it easy for anyone to donate to help with the cats’ care. Joan says she was motivated to start the ChipIn when she learned about the cleaning process and was told that massive quantities of baby wipes were needed to clean the cats’ fur. The ChipIn monies are being used to purchase supplies and to help compensate Scott Vet, a small practice, for their efforts.

In addition to the food that has been donated since Jan. 3, authorities have been able to recover the 2,000 pounds of Science Diet cat food which had been given by the company to the Sanctuary, and which was stockpiled in an outbuilding while the 2oo-plus cats starved.

GCAS needs the continued service given by on-site volunteers who are  helping these cats to forget about the past and prepare for brighter futures. 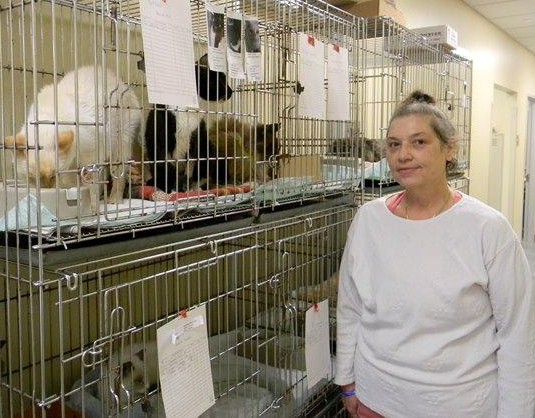 A Whiskerville Animal Sanctuary Facebook page has been set up by concerned cat lovers, to help the rescued cats and to show support, to contribute to their care, to share their knowledge of the situation at Whiskerville, and to try to prevent the sanctuary’s owner from continuing to operate this or similar facilities again.

Note: Many thanks to Joan Addison for providing information, and for helping us to understand how the cats are faring and to know of the the dedication of those tending to their care.