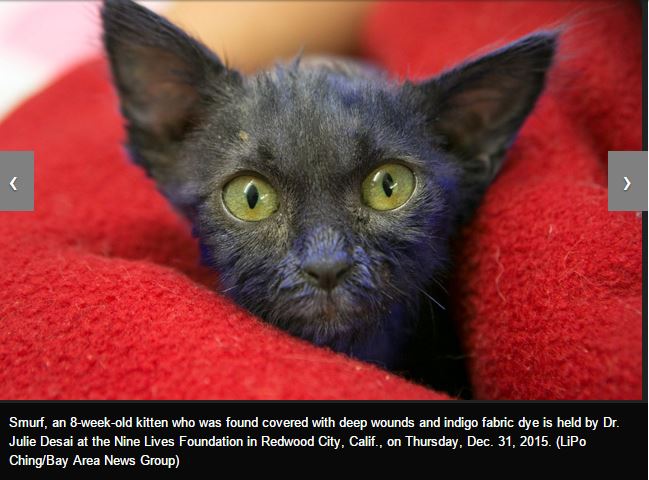 Cat lovers everywhere were outraged by the story of a kitten named Smurf who was dyed purple and used as a chew toy. “I feel sick to the pit of my stomach,” said Paris Hayat, commenting on LifeWithCats. “I am horrified by the cruelty of human beings! The poor baby!” Grace Garcia Santos-Ocampo wrote. Smurf is a typical victim of animal abuse. What’s not typical is the attention he received. “The shocking number of cruelty cases reported daily on television, on the Internet and in newspapers is only the tip of the iceberg,” according to a report by the Humane Society of the United States. “Most cases are never reported.” LifeWithCats frequently features cases involving animal cruelty and abuse, including a kitten that survived being thrown from a car in Naples, Florida, and another kitten named Bobbi who was rescued after he was mutilated by an unknown attacker in Bedford, Texas.

Smurf’s bright purple fur and bite wounds made it obvious that he was a victim. Open wounds are one of the most identifiable signs of abuse, according to the ASPCA guidelines on how to identify victims of animal cruelty. Smurf’s story has raised awareness of the chronic problem of animal abuse and prompted veterinarian Monica Rudiger to reflect on all the other Smurfs out there who are overlooked. “I appreciate the exposure,” said Rudiger, who founded the Redwood City shelter where Smurf was treated. “But I hope the message is long-lasting that animal cruelty is real, and this is just one guy who’s experienced it,” Rudiger told CNN, which ran this headline: “Would You Care About this Kitten If He Weren’t Purple?”

“He’s a really trusting little kitty who is enjoying the attention he is receiving right now,” said Dr. Julie Desai, who is featured in a video posted by the San Jose Mercury News. Desai is the veterinarian who treated Smurf, who is being cared for by the Nine Lives Foundation. Smurf had 20 deep bite wounds and was running a temperature of 105 degrees. The Mercury News report included a photograph of the box in which Smurf was found. Its contents included purple rags and lemon slices. “I’ve seen a lot of animals used as bait for other animals,” said Rudiger, who believes the kitten was dipped in a bath of indigo fabric dye to make him look like a toy. “I think there are people who find it amusing to take small, innocent animals and use them as play toys,” Rudiger told the San Jose Mercury News.

What should you do if you see someone abusing an animal? Don’t put yourself in danger. But do make a report. “If you think someone you know is abusing animals, please speak up,” the ASPCA says. Write down the names and numbers of local animal shelters and law enforcement agencies you can contact. “The best thing you can do is report your suspicions of cruelty to your local law enforcement agency, humane organization, animal control agency or taxpayer-funded animal shelter,” the ASPCA advises.

Abuse can take many forms. Here are some other telltale signs to look for, according to the ASPCA: A collar that has caused a neck wound or become embedded in a pet’s neck is evidence of neglect. Extreme thinness or emaciation, and fur infested with fleas and ticks as well as matted or dirty fur, hair loss and untreated skin conditions are all evidence of mistreatment. Weakness, limping and the inability to stand or walk normally are signs an animal is in distress, as well as heavy discharge from the eyes or nose. Any animal that is left tied up for long periods without food or water is also in trouble and needs help.

2 thoughts on “What “Trusting” Smurf Taught Us: Most Animal Cruelty Cases Ignored”