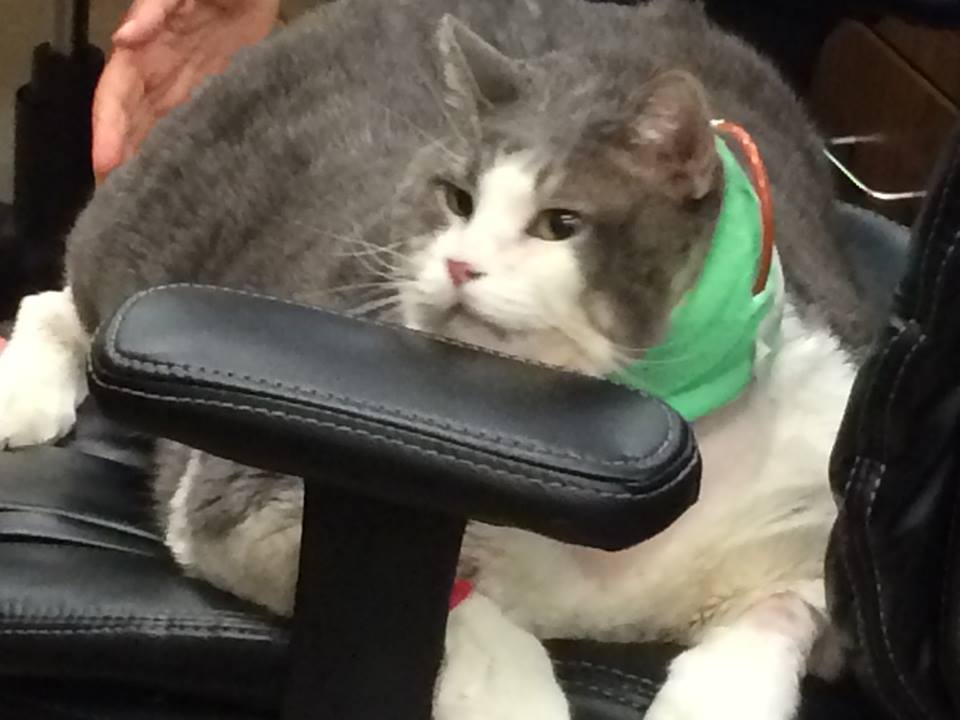 Like many other cat lovers, we keep checking in with the Riverside Cat Hospital’s Facebook page for updates on Biggie, the sweet, hugely obese cat who has undergone surgery as part of a very tumultuous week.

Biggie’s story has been in the news, and we have made two earlier posts on his story, Cat Hospital Adopts 37 Pound Cat and 37 Pound cat Biggie is Recovering After Surgery.

Biggie’s former owner brought him to Riverside Cat hospital in Riverside, California last Saturday because he was suffering from severe constipation that was likely going to reqire surgery. At 37 pounds, Biggie was incredibly obese, and his fat would complicate treatment. Unable to bear the presumed great costs of Biggie’s medical expenses and no longer able to care for him, his owner turned him over to the hospital, which adopted him. He will now be adopted by Riverside Cat Hospital’s Dr. Nichole Agarwal.

Biggie had surgery to remove several blockages causing his constipation on Tuesday at California Veterinary Specialists, in Murrieta, with Dr. James Wignall performing the surgery.  He came through the surgery better than he was expected to, but has been under a watchful eye during his first few days of recovery. As Dr. Agarwal explained in a video we shared in 37 Pound cat Biggie is Recovering After Surgery, he was at risk for sepsis and the need for another surgery due to the nature of his condition, which she says was likely caused by his eating dry food and not drinking enough water.

Other than a fever that has him being closely watched and given strong antibiotics and IV fluids, Biggie has done well in the three days following surgery.

If he recovers well from the surgery, the focus will be on his safely losing weight and getting fit. He is already able to get around better than before.

His caregivers wrote in an update yesterday: “Biggie’s temperature has been normal for the past few hours and he is moving about very well. He’s taking his tube feedings well also. He is even pawing at the staff to get them to pick him up in their laps and then he purrs. He’s SUCH a love!”

Both Hills and Royal Canin have offered food sponsorships for Biggie. His caregivers will decide which food will be more beneficial for his health and weight loss regimen and also which one is going to be more palatable to him.

This has been a week of great change and trauma for Biggie, who has remained sweet and loving throughout, his caregivers say.  While he has new friends and family members who are showering him with love and attention, Biggie is also adjusting to the loss of his former home and owner.

As for his weight, Biggie tipped the scales at 38 pounds at California Veterinary Specialists before his surgery. He weighed about 36 1/2 ponds in a later weigh-in.

Here are some recent updates Riverside Cat Hospital has made at Facebook: