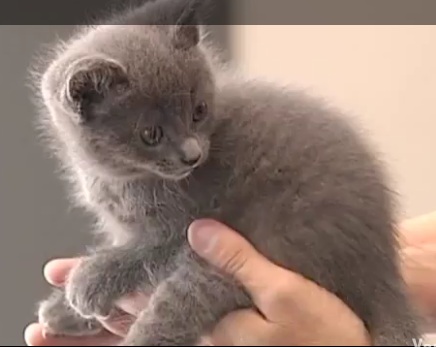 Theresa Burson went to the Portland OR Humane Society last Friday after seeing her kittens on the news the night before. She says they must have crawled into the undercarriage of the family’s vehicle and then fallen out while her husband was driving to work on Thursday morning.  The kittens were previously thought to have been thrown from the vehicle.

Pyper McFarland, one of the women from our story Good Samaritans Rescue Kittens Thrown From Minivan now describes the kittens as dropping from the minivan, which seems to corroborate Ms. Burson’s story. She recounted the situation this way, “I noticed it started raining kittens out of a car which is not a good thing…next thing I saw another one drop and flop out and I swerved to miss that one, and then I slammed on my brakes cause then I saw another one coming.”

At the time of the incident on Thursday, Ms. McFarland found two kittens, one of which died. Another person found a third kitten. One of Mr. Burson’s co-workers found a fourth kitten on Friday morning near their Vancouver workplace. It appears that all of the kittens are now accounted for.

Because one of the kittens died, the crime of throwing them from the vehicle would be charged as a felony. Humane Society officials interviewed both Ms. Burson and her husband. They credit her for coming forward but will not yet comment on the new twist in the story, saying the matter is still under investigation.

1 thought on “Update: Family Says Kittens Not thrown, Fell From Undercarriage of Minivan”