The cat found frozen to a driveway had his scheduled surgery today and is resting afterward. News of his condition and the details on surgery have just come out. 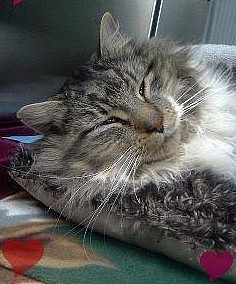 Trooper’s rescuer and closest friend, SCAPA director Gwen Samms, reported that Trooper went for his surgery today later than had been expected. The cat went into surgery at 2:30 PEI time.

An NTV news broadcast earlier today confused some supporters when it appeared to report the outcome, when it only gave the expected plans for surgery as provided by Gwen.

The first trustworthy indication that Trooper had come through surgery came from the Twitter feed of reliable CBC PEI reporter Sara Fraser, who reported a little over an hours ago that vets from Atlantic vet College said Trooper had come out of surgery and was resting comfortably in ICU. They indicated that his recovery would be monitored one day at a time.

Finally, as we and supporters tried to resist rumor and speculation, news came from Gwen that Trooper had, as expected, had his frostbite deadened leg removed in surgery. The surgery, which took 2 1/2 hours, went well, and he was also neutered.  We do not yet have details on how his pelvic fractures were addressed. It was expected that screws would be used.

Gwen described Trooper as being cranky at first after waking up and said he is tired and needs his rest; so that is what he is doing right now.

We will report any significant further updates. Like many of you, we thought of Trooper often today and are relieved that he made it through surgery.

4 thoughts on “Trooper Out of Surgery: Breaking News”