Just over a week after his surgery, Trooper is on the mend and headed back to Newfoundland with his guardian Gwen Samms. The injured cat left frozen to the ground has had a remarkably changed life since his rescue. 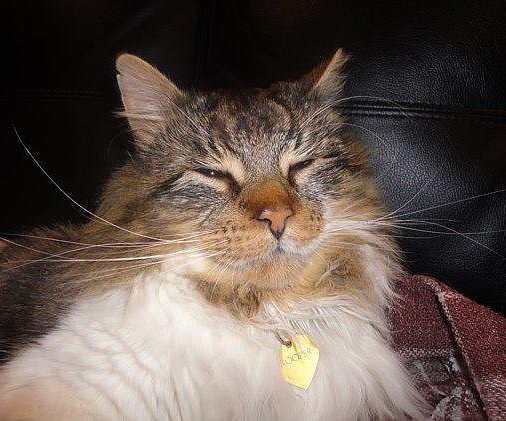 Trooper was cold, injured, alone and near death when a concerned person called Gwen Samms of the Newfoundland, Canada rescue group SCAPA. Worse, he was all alone in his suffering while a family sat inside their home knowing he was out in their driveway.

Things changed for Trooper from the moment Gwen arrived, and his story has captured the hearts and minds of many across Canada, the US, and beyond.  After Trooper was stabilized and examined, plans were made to fly him to Atlantic Veterinary College in PEI for surgery. Trooper had his surgery on Friday, February 24. He had a frostbite deadened hind leg amputated, had his pelvic fractures tended to, and was neutered. While at AVC, he was also treated for a urinary problem caused by neurological damage from his injuries. It is thought that trooper was hit by a car or crawled up into an engine.

Trooper has recuperated very well since surgery. Gwen made this update on Wednesday, “GOOD NEWS; Hi everyone.When they had Trooper out this morning for some exercise he was able to walk back to and into his cage by himself..slowly but by himself,yaaay…As for his bladder function and I quote “Trooper has shown a HUGE improvement in his bladder function”….He still has a way to go but this is great start…..We are so excited about this news..See what the power of love,prayers,good vibes and compassionate care givers can do…Thank you to everyone that supported and stood by a kitty in need…I truly believe that Trooper is on his way back to having full and happy life….”.

Trooper is adjusting to being a tripod kitty and has recovered much of his bladder control. The most recent update from the hospital on Trooper’s condition, made toady, is that he is walking more and feeling more energetic. Loving the attention during a grooming session The little patient, who has received nothing but love and caring concern since the moment he was saved, on February 11, has healed well and responded to treatment. Now, he is set to return home with Gwen tomorrow. He will stay with Gwen’s sister and fellow SCAPA rescuer Dolores, in foster care.  He still has a long way to go to a full recovery, so adoption is not a consideration at this point.

Gwen says, whatever the future holds for him, “TROOPER WILL NEVER KNOW LONELINESS OR COLD EVER AGAIN..”

A short video of Trooper at play during his recuperation.

Trooper’s medical care and costs will be ongoing for some time. Those who wish to donate can use the Chipin here: Trooper Scapa Chipin. Otherwise, donors can send funds directly with PayPal, or can send an international money order (if sending from outside of Canada) by mail.

PayPal donations can be made by clicking on Send Money at the site and sending to the email address [email protected] .

Money orders should be sent to SCAPA, 15 Utah Dr. Stephenville, NLA2N 2Z4 Canada. If you live outside of Canada, please remember to purchase an international MO.  Please make a note that your donation is for “Trooper’s vet treatment”.

Updates and photos used with permission of SCAPA.

4 thoughts on “Trooper on the Mend and Headed Home”