Trooper was hit by a car and then froze to the ground where he sat, in someone’s driveway. Rescuer Gwen Samms was called in a day later and Trooper was saved, just in time. 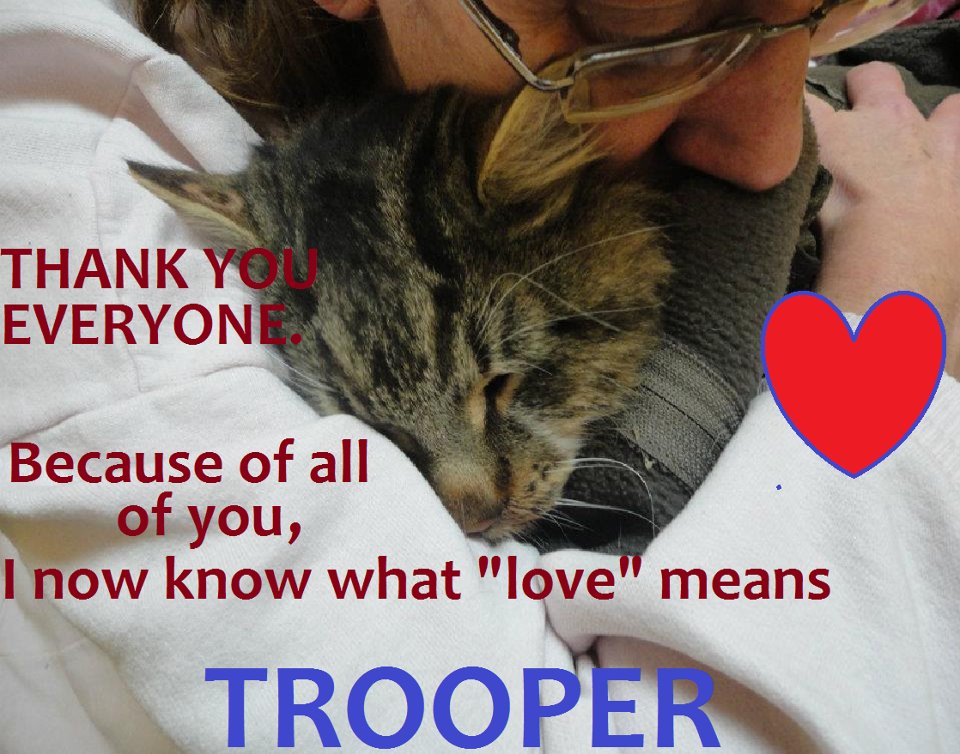 Trooper was stuck sitting in an awkward position, frozen to the ground in a residential driveway in Newfoundland, Canada late last week. A tire track was impressed into the ice just inches from where he sat. The residents of the house he sat outside of are thought to have known he was there and done nothing to help. Some think they were responsible for hitting him, but there is no definitive proof of that.

Others did come to Trooper’s aid. A neighbor brought dry food for him, and someone made the call that brought Gwen Samms to the scene on Saturday. Gwen had help making the rescue, as people brought her buckets of warm water that she had to use to gently free the injured, freezing cat from the ground.

Trooper allowed himself to be cuddled for warmth, and showed gratitude to his rescuers almost immediately. He was truly saved; his body temperature was found to be extraordinarily low when it was measured at the vet, though he had been held close and wrapped in a blanket from the moment he was pulled from the icy ground. Trooper is thought to have sat frozen to the spot for at least 18 hours, and was dangerously close to freezing to death when he was rescued.

Trooper has rebounded well over the last several days, and will have surgery for his injuries when he is well enough. The call for an emergency ChipIn to raise $5,000 for Trooper’s care went out to rescuers and the Facebook community, and it has nearly made its goal, less than a week later. The Chipin link can be found HERE, for anyone who wants to contribute. Trooper is being cared for by SCAPA, a no-kill shelter.

The two news reports below tell somewhat different aspects of the story, so we felt we had gotten a better grasp on the story by viewing both. Each has a segment with Trooper’s rescuer Gwen Samms, who talks about the rescue.

8 thoughts on “Trooper, Injured Kitty Frozen to the Ground Saved By Rescuer”