Tilly is a rescued cat who took to doing tricks for her petmom in a way that most people associate with dogs – not cats!

Tilly is a two year old rescue kitty from Nunica, Michigan who turned out to have a talent for quickly mastering tricks. It did not take her family long to realize she was special, and they hope Tilly’s ease with tricks will help convince some dog lovers that cats are cool companions, too.

Tilly’s petmom, Sherry Vanderwier, says Tilly likes treats and is more than willing to learn her tricks in exchange for her little rewards, though she started doing her tricks while Sherry was playing with her.

“I was just playing with her and she started doing the things and she likes treats, so every time I said okay let’s try a new trick. So, we try a new trick and she would do it,” Sherry said.

“Most people that are dog people and not cat people is because the cat has a mind of its own; won’t come when you call it, won’t do tricks, won’t do any of that stuff, but she is very different.”

Sherry says Tilly has more tricks in the works, and is still perfecting her talent.

When reporter Troy Campbell recently visited Tilly at her home, he got no response to his prompts asking her to do her tricks, though she readily goes into her routine for her mom. You can see in the news report below that Tilly listens attentively to her mom’s voice, even when Sherry is talking to Troy and not to her.

Watch the news report on Tilly and her tricks:

Here’s a video with Tilly performing some of her tricks that we found at YouTube: 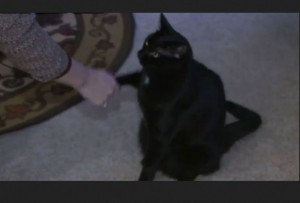