Tiger the cat was stuck up a utility pole surrounded by live wires for 2 days, with people on the ground unable to get help. Finally, Jeff Fillmore of Idaho Power brought him down and saved the day, but Jeff is just one of the heroes who went out of their way for the frightened cat. 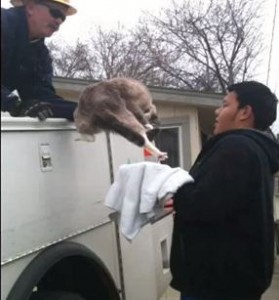 Tiger sat up a Caldwell, Idaho utility pole for over two days, unhappy and frightened to climb down, as his owners, concerned neighbors and a widening circle of friends all tried to get help. They called all of the local authorities and the power company to no avail. A persistent woman and a happy coincidence eventually helped bring Tiger down.

Just as Idaho Power agreed to assist, a power company driver happened to drive by the scene, and he agreed to make the rescue. Idaho power employee Jeff Fillmore took about a half hour to set up his equipment for the rescue and get the cat down to safety.

The person who posted the following raw video of Tiger’s rescue says this about the rescue and the events leading up to it:

Tiger the cat was rescued onMonday March 26th 2012, after spending over 2 days on a power pole!
The last 2 days in Caldwell Idaho have been windy, rainy, snowing and cold!
Jeff Fillmore with Idaho Power went out of his duties with Idaho Power to rescue Tiger.
The owners, The Islas, called everyone they could for help, but were turned down by all except Idaho Power.
Jeff has rescued cats in the past, but says it’s not Idaho Power’s responsibility to rescue cats. He also said that almost all cats that climb trees or power poles eventually come down on their own.

Tiger was surrounded by electricity and wanted down in the worst way.
Jeff put a cover on his box and put along side Tiger and within minutes was safe from being shocked.

One of many people involved in this story is Meghan Watters, a local musician from Boise.
This is her story leading up to video.

I originally found the post on my friend, Heidi Allen’s Facebook wall. She just found out her grandfather had terminal cancer, so she came to town for his birthday. While visiting was made aware of her family’s neighbors desperate situation to save their family pet. Time after time they were told no one could help and it was much too dangerous…and that the cat would come down on its own. But a storm was coming and it had already been 2 days. The family put out food, water, cheering Tiger to come down. The family was distraught and felt no hope because no one could help. Idaho Power said the safety hazards are too great. As you well know, this whole story would break anyone’s heart. How can you listen a pet cry all night for help and not do anything? I tried Tates Rents but the offices were closing and wouldn’t be able to rent a man bucket in time. That’s when I started making phone calls, posting on FB and personally writing and calling my friends and my friends at Idaho Power. But unfortunately, without a Power Outage, there was nothing they could do. It was considered too dangerous. As more time went on, we all felt desperate and we continued to try to convince someone, anyone but we kept being turned down by the Fire Department, Humane Society and Idaho Power. The only people that have the right equipment to do anything about the situation. We then contacted all the news channels hoping that might be able to help get Idaho power or someone with the tools to help us. I called my “get er done” friend, Cori Piccione, owner of CL Services, she contacted the Fire Chief, who in return put the heat on and contacted Idaho Power. Idaho Power finally agreed to come out!

Raw video from the rescue: