Three years and 42 cats later, Carl Kahler finished the portrait requested by Kate Birdsall Johnson.  Commissioned by the millionaire in 1891, her husband purportedly joked that the painting should be named, “My Wife’s Lovers.”  It is.

Johnson was well-known for her flights of feline fancy.  Many newspapers carried stories of her love of cats.  In 1848, The San Francisco Chronicle wrote, “Mrs. Johnson was very fond of cats…,” which nicely sums up her love of the animals.  In fact, the cat who is at the center of the painting was “Sultan,” for whom she paid $3000 for during a trip to Paris.  Sotheby’s auction catalog stated that at Johnson’s summer home of 3,000 acres she had some 350 cats, each with a name it recognized when called.  According to her will, Johnson wrote $500,000 to be set aside to take care of her beloved cats in the manner to which they were accustomed.  To what they were accustomed was a dedicated staff whose sole purpose was to care for her felines. 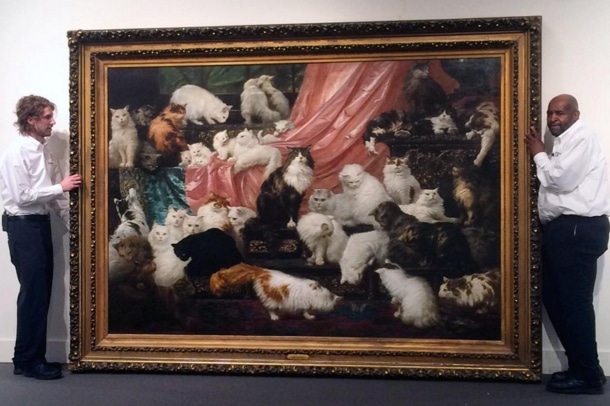 The painting itself weighs in at 227 pounds and sold recently at a Sotheby’s 19th Century European Art Sale on November 3, for $826,000.  Considering that Johnson was, perhaps, one of the leading cat enthusiasts of all time,  it can only be hoped that this painting, perhaps the largest of its kind in the world, has sold to someone who is equally a feline fanatic.