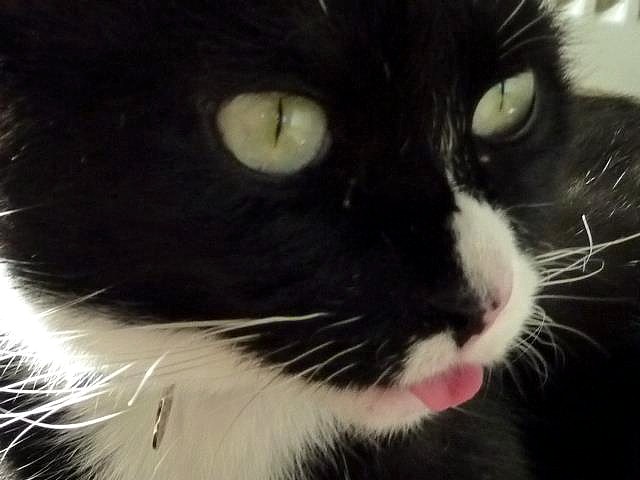 Sonny
Marie Newberry of Liverpool, UK shares her story from 2010.
.
Shortly after the loss of  her beloved cat Rosie, Marie adopted Sunny and Daisy, special needs kitties who had been passed over for adoption for a long time.  The pair settled in to their new forever home and all was well until Sonny went missing, leaving Marie with all the emotions and anxieties common to people whose pets are lost, compounded by the knowledge that Sonny needed extra care to stay alive.
.
Here is Marie and Sonny’s story:
.
I’ve been scared of Sundays since I had to help my beautiful Rosie go to the Bridge on Sunday June 6th 2010. I got up that morning and knew something was seriously wrong, Rosie wasn’t sleeping at my side as usual. I found her blind, scared & unable to move under her favourite Lilac bush in the garden and I knew her time had come.  I said goodbye at 9:45 am and my heart broke into a million pieces.

After vowing never to have another cat in my home I somehow ended up on Catchat, a rescue page where Sonny & Daisy were looking out right into my eyes. Well that was me, hooked & already planning their homecoming. Sonny & Daisy suffer from eosinophilic granuloma and had been in the rescue all their lives, they were 2.5 years old. They almost had a forever home 3 times but at the last minute each adopter decided against taking them. Until I saw them & vowed to bring them home. They came home on August 24th 2010 and I was hopelessly smitten.

All was well until Sunday 12th December. That dreaded Sunday again. I got up and was in the middle of preparing their chicken to give them their steroid tablet when Sonny decided to go outside while he waited.

An hour later he still hadn’t returned, I knew he was gone. I felt it in my heart and then the tears came and did not stop. I went out searching & shouting & crying. After knocking on all my neighbours doors, searching their sheds & having them look in their houses I went home heartbroken. Sonny was missing. My son & husband went out that evening & still nothing.

I was worried silly and feeling like a failure…..I brought him home 4 months ago for a better life and now he was lost & alone & no doubt scared. It was my fault, if I hadn’t brought him home he would be safe in his cage at the rescue. I was inconsolable.

I was worried that Daisy would pine for her brother but no, she loved being the only cat in the house!

Every day I went out searching, posting leaflets and knocking on doors. I went out at random times – early hours of the morning, late morning, early afternoon, evening and late at night. I couldn’t sleep so I thought I may as well be doing something. Every time I went out I took Sonny’s favourite toy, a stick with a bell attached by a string and shook it hoping he would hear it & remember how much he loved to play with it.

Then on Friday 17th December it started to snow and did not stop. The snow was calf deep and I started to lose hope. There was no way a little fella who had no street smarts could survive this – it was -8 and the snow was falling intermittently.

The weather didn’t stop me searching, if anything I was more determined to find him & bring him home. Despite my best efforts I couldn’t find him.

At 20:25 on Friday 24th of December my phone rang. My heart stopped & I could not breathe. Instantly I knew it was someone ringing to tell me they had my beautiful Sonny. I asked my son to answer the phone as I was already crying and he said 1 word in reply to the caller – yes! Well I took the phone from him and through my sobs asked if they were ringing about my cat and OH MY GOD the lady said ‘if it’s a small, scared black & white one, then yes I am’ The 3 of us just cheered and I completely broke down. The lady had seen him hanging around the day before and was able to tempt him in with some chicken, poor Sonny was starving. She got my number from his id tag and called me.

We went round there & then and I can’t tell you how grateful I was to that kind lady, her husband & 2 children who had rescued him from the snow that night. I told her she had made my Christmas, and tried to reward her but she refused saying she was so happy to have reunited us as I was clearly delighted to have him back.

Although he was scared & disorientated I was able to gather him up & bring him home. We got indoors & he was very wary, sniffing all around. Daisy was NOT happy to see him, in fact she tried to batter the poor little boy until he went to the safety of his igloo. He fell asleep but kept waking up with a start & crying. I did my best to calm him and this went on for a few hours until I carried him upstairs to my bed, where we settled down. He woke twice more after a nightmare but on the 3rd time he realised he was home, safe & where he was loved. He came over to my face and let out a huge sigh and laid his head on mine & went peacefully to sleep.

Christmas morning dawned and my boy Sonny was still sleeping on my pillow – it was the only thing I had asked for and amazingly I was given the best present in the world. The safe return of Sonny.
Daisy continued to punish him for a week but soon settled down into their old ways of sibling bickering. JOY!

We went back to the lady’s house a few days later & posted a reward through the letterbox, how could I not – I had my Sonny back & I wanted to give her & her children a treat.

Thank goodness for the kindness of strangers who took pity on a starving cat at Christmas, I will never forget them.