An animal rescuer heard meowing when she stopped for gas and found a very upset and grease smeared cat trapped between the cab and tanker of the semi-truck delivering gas to the station. Tanker, as he is called, cleaned up as good as new and will be available for adoption. 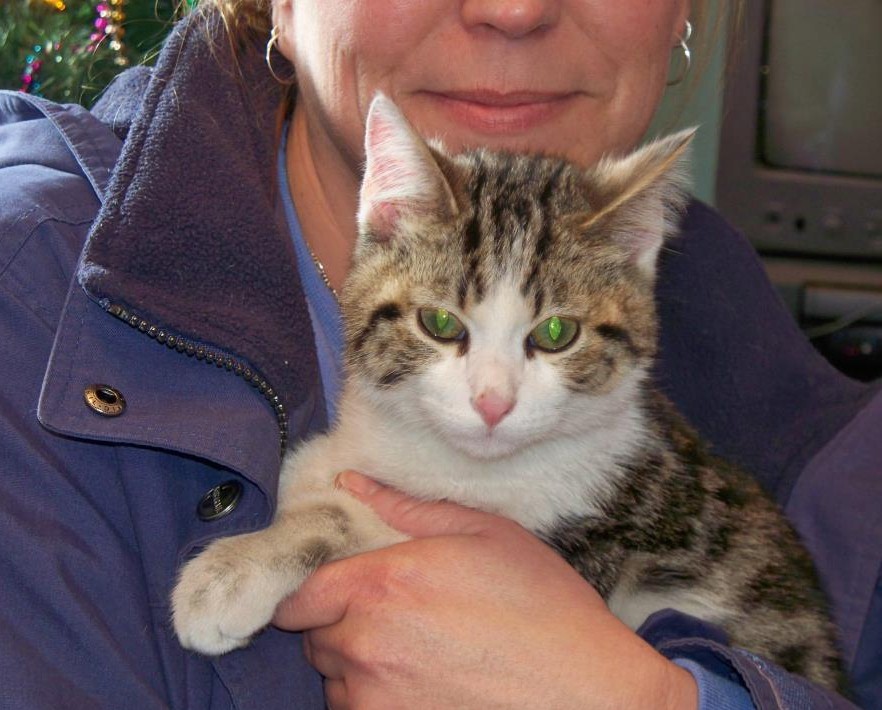 Tanker is sweet, fluffy, calm and clean, now that he is safe in the hands of Friends of Noah, a rescue and shelter in Amelia Ohio.  The six month old kitten had a very distressing adventure last week, though, after he climbed up into a crawl space where the trailer and tanker components of a big rig gasoline delivery truck meet. Tanker traveled along from Highland County, KY,  to Indianapolis, Cincinnati, Lebanon and, finally, West Chester, Ohio over the course of a single day.

The gasoline truck was making a delivery at a Krogers when animal lover and pit bull rescuer Deb Donley happened to stop there. Deb heard a cat’s cries and set about checking every car in the parking lot in search of the animal that she clearly understood to be in distress.  As soon as she approached the truck, Deb knew she had found the cat. The driver said he didn’t have a cat traveling with him but had heard sounds that day. Deb scooted underneath the truck, spotted the kitten, climbed up into the space, and pulled him out.

Tanker was frightened and streaked with grease, but settled down after some cuddles and a cleaning. Friends of Noah will have him neutered, vaccinated and microchipped, and will put him up for adoption. After his ordeal, tanker’s life is turning out for the better.

As Tanker’s story demonstrates, sometimes a pit bull lover can be a cat’s best friend.