The Highland Park, IL organization took the severely matted, neglected cats and is helping to restore them to the clean and healthy cats they should be.

The unfortunate felines were kept in filth in a garage with no ventilation, heat or air conditioning, and very little light. They were not groomed or given medical care.

Tails of Hope learned that a local family wanted some group to take the cats from their garage because they planned to renovate the building. The  organization agreed to rescue the cats. According to reports, the family started with two cats, which were purchased from a breeder, placed in the garage, and allowed to breed.

Tails of Hope has had the cats neutered and vaccinated and has had the huge and filthy mats removed from their coats.

A series of photos show the extent of the degradation to the animals’ long fur. Some cats had to have their tails amputated.

The animals were distressed and disoriented after being taken from the garage, and need help to become socialized.  The animals’ new caregivers feel they will all be able to adjust and become good house pets, though some may remain shy.

A few of the cats will be ready for adoption soon, and the organization is seeking foster caregivers for the others. There are two young kittens, along with cats ranging up to about 5 years old.

Tails of hope has spent a considerable amount of money caring for the Persians. They held a fundraiser on June 20 to help with costs, and are accepting donations at their website.

Highland Park police are conducting an investigation into whether charges should be brought against the collectors who allowed the cats to live in substandard conditions. 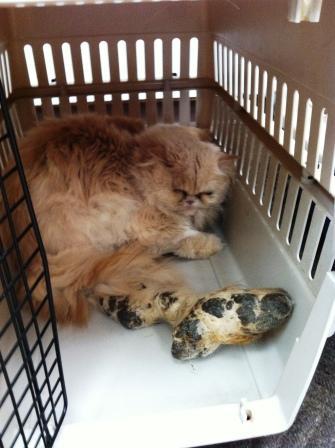 Getting shaved, and having a huge matted mass of fur removed. Looking and feeling much better.