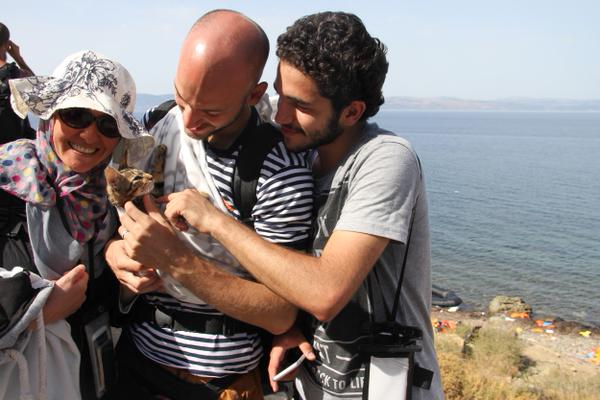 A refugee family fleeing Syria managed to bring their beloved kitten with them as they made it safely to Lesbos, Greece.

Activist and Roar Magaine contributor Tamara posted the touching photo of the family, seen above, at Twitter Thursday, writing: “This Syrian family brought their beloved cat to Greece.”

The man seen cuddling the kitten in the photos told volunteers helping refugees that kitty’s name is Zaytouna.

Tamara added: “Today we helped these #RefugeesGr as they reached the shore in a state of shock: crying, shaking & kneeling to pray.”

This Syrian dude brought his kitten all the way from #Syria to #Greece, on a fucking boat. #Priorities #Refugees pic.twitter.com/vyCWs1oF22 — The 47th (@THE_47th) September 11, 2015

3 thoughts on “Syrian refugee family flees with their beloved kitten”