SLC Animal Services is following up a successful pit bill adoption campaign with one to increase adoption rates for cats. They’re using a “Super” gimmick to kick off the campaign. 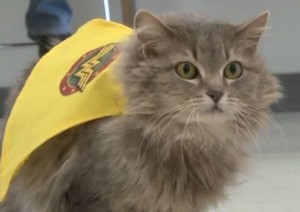 Best Friends Animal Society has joined forces with Salt Lake County Animal Services to launch the Cat Crusaders volunteer program, with the goal of increasing the shelter’s save rate for cats by 10 percent. Animal Services officials hope that working closely with Best Friends, a national leader in the no-kill movement, will help change people’s perception of the shelter and result in more adoptions.

“One of our biggest challenges right now is shaking the stereotype of ‘Animal Control’ where people see us as the ‘pound’ or simply a stray holding facility. We want to market ourselves as an organization that is committed to saving lives.”

What happens when Supurrman, Spawderman, Catman, Whisker Woman and Captain Americlaw join forces against a terrible trio of (catnip-stuffed) villains?

The goal of the Cat Cru is to increase the feline save rate by 10 percent over last year in Utah’s largest city. Salt Lake County Animal Services took in 4,355 cats and kittens last year, and 2,457 were adopted, rescued or returned to their owners. Holy statistics Catman!

The Cat Cru is modeled after another very successful joint effort between Best Friends and Animal Services– the very successful Pit Crew program, which, since its inception in July 2009, has bumped up the shelter’s save rate for adoptable pit bull terrier-type dogs from 80 percent in 2008 to 99 percent in 2011.

“One of our biggest challenges right now is shaking the stereotype of ‘Animal Control’ where people see us as the ‘pound’ or simply a stray holding facility,” said John Coulter, special program manager for Salt Lake County Animal Services. “We want to attract new adopters to our shelter and market ourselves as an organization that is committed to saving animals’ lives. Our Cat Cru volunteers will be instrumental in helping us create a movement that does just that.”

Organizers are plotting to develop the Cat Cru into an active volunteer network that creates proactive solutions to boost feline adoptions. Volunteers will photograph the cats and write captivating descriptions to increase their online and in-purrson appeal. They’ll also function as adoption ambassadors who will meet and greet potential cat adopters, answer questions and assist with adoptions.

A special group of Cat Crusaders will serve as the “neonatal team”—on-call fosters ready to swoop in and rescue orphaned newborn kittens needing immediate bottle feeding. These teams will care for these “bottle babies” temporarily until a longer-term foster home can be arranged.

Cat Cru volunteers will play a super important lifesaving role for these homeless cats and kittens. But equally important are all the heroes and heroines who save lives by adopting their fabulous felines from the shelter.

In the spirit of saving lives and working with other humane groups to bring about a day when there are No More Homeless Pets, Best Friends Animal Society partners with Salt Lake County Animal Services to help find furever families for as many pets as possible.