Animal lovers came through when Speedo’s life was in danger, and now he is safe in his forever home.

Between September 24 and November 4, we did three posts on the special needs foster kitten named Speedo, whose splayed legs suggested that he’d been born with Swimmer’s syndrome, so-called for the way an affected animal moves their legs while trying to move around.

When Speedo was turned over to the Animal Welfare League of Arlington in Arlington, Virginia, AWLA placed Speedo in a foster home with a devoted and experienced caregiver who made sure he got plenty of love, learned to be a happy housecat and received a combination of physical therapies, including acupuncture and massage therapy, as well as beneficial play.

At home, Speedo’s foster Mom used simple but effective methods, like taping his hind legs and making a narrow courseway for him, and the kitten who had formerly dragged himself around made great progress and began to walk, run and play.

Speedo’s foster caregiver described him as an “adorable and energetic” kitten “who is growing in personality by the hour.”

Unfortuntely, a  re-diagnosis of his condition put Speedo’s life in danger. The new diagnosis concluded that Speedo suffered nerve damage during a difficult birth process and he would have lasting damage that included incontinence. Other than the incontinence and a somewhat crooked gait, Speedo was not in pain, and had no health issues or medical expenses, the shelter decided he would have a limited pool of potential adopters and would be euthanized if his foster caregiver could not find him a home, despite his being (in his foster’s words) “the most loving and sweetest kitten in the whole widest world.”

The kitten who had come so far, and who had become fairly well known through his petmom’s YouTube channel, website and Facebook page, and who had animal lovers cheering him on in his progress, was headed for Death Row.

Our post of November 4, Speedo the Special Kitten: A Day in the Life and an Urgent Appeal, shared his petmom’s appeal looking for someone to save Speedo’s life and to give him a good home. The post also includes a heartwarming and inspiring video on “A day in the life” of Speedo that was made poignant by the realization that his life might soon be snuffed out.

Once word got out – and we send a big thank you shout out to those Life With Cats readers who helped to share Speedo’s plight – Speedo’s foster received several offers from people who wanted to adopt him, and he has gone to live with someone in her area of Virginia.

“So we made this video and shared Speedo’s story with everyone that we could in the hopes to find his new forever home and save him from euthanasia. Within the first week we received so many messages from people all over the country wanting to help in some way and especially being interested in welcoming Speedo into their own home. It was such a blessing to witness all the love and support for this little guy, and to see how many wonderful people there really are out there.”

“Thankfully, we were incredibly fortunate to get in contact with an absolutely wonderful couple that actually lives in our area. They were able to see Speedo, and he seemingly captured their hearts immediately, just as he captured ours. They were so concerned and caring throughout this whole process, and so willing to do whatever it took to make sure Speedo had his fair shot at life. And we now have the comfort of knowing that he will have that fair shot, and will indeed live a long, healthy life full of the care and love he deserves, with two incredible parents and a new, older step-brother.”

Speedo’s new family have started a Speedo Man- the Swimmer Syndrome Kitten Facebook page for him, where we can all follow his progress as he grows and improves in his forever home.

An update at the Shelter Cats and Kittens Facebook page on November 12 says: “Speedo is doing great and seems to be settling in very well in his new home. He is getting along with his new step-brother, and even playing with him and eating out of the same food bowl. His appetite and energy have been great, and he has two incredible parents who love him dearly. He is obviously still trying to catch that laser pointer. It is safe to say that Speedo has officially found his family and home.”

You may want to drop by the Speedo Man- the Swimmer Syndrome Kitten Facebook page and wish him well in his new home. 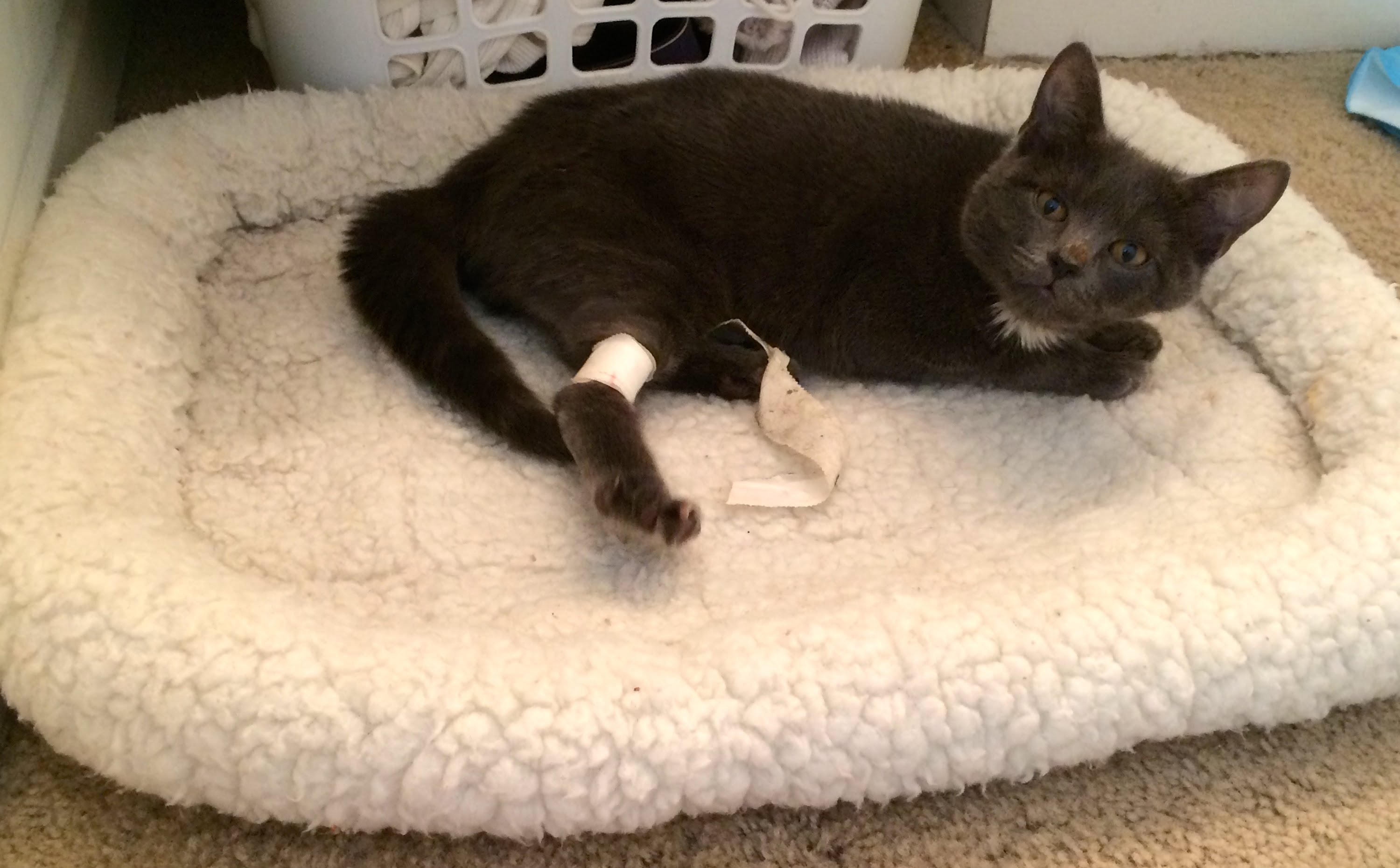 Speedo the Special Kitten: A Day in the Life and an Urgent Appeal

2 thoughts on “Speedo Finds a Home”