Snow was found with chemical burns on his neck and head and taken into care by Paws for the Cause Feral Cat Rescue in MI. Since the group first posted his pics last week, well wishes and much needed donations have poured in. Snow is FIV positive, making his battle to heal a challenge. 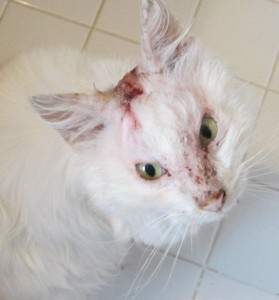 Paws for the Cause Feral Cat Rescue, which serves feral cat colonies in Southeast Michigan with TNR and care, was contacted on April 5 by a couple from Sterling Heights who reported a cat in their back yard. Scared and starving, Snow eluded his rescuers for a day before they were able to trap him and take him to the vet.  Snow’s front legs had been bound while someone put a chemical on him that burned right through to muscle in a large patch on his neck. Lesser burns affect his face and head. Complicating matters. Snow is also FIV positive. The first vet said he would not be able to heal from his burns and live, so Snow’s rescuers took him home to make him comfortable. They then contacted other vets who said it’d be a challenge, but Snow may be able to recover.

Photos posted at the Pause for the Cause Feral Cat Rescue Facebook page, along with local news coverage, have brought support and concern for Snow, and anger at his torturer, who has not yet been found. A ChipIn has helped raise much needed funds for Snow’s care, and we’ve included the ChipIn widget below. Snow has seen several vets so far, and will be receiving care with Dr. Jeremy Krieger at Wilson Veterinary Clinic in Romeo and Sterling Heights. Paws for the Case is working on the details of setting up a fund for direct donations to the vet.

As of today, he has his own Facebook page, too, Snow’s Page.

Action news 7 story from this evening, telling of the support Snow has received since he was found last week:

3 thoughts on “Snow, Burned Kitty, Gets Help and Support”