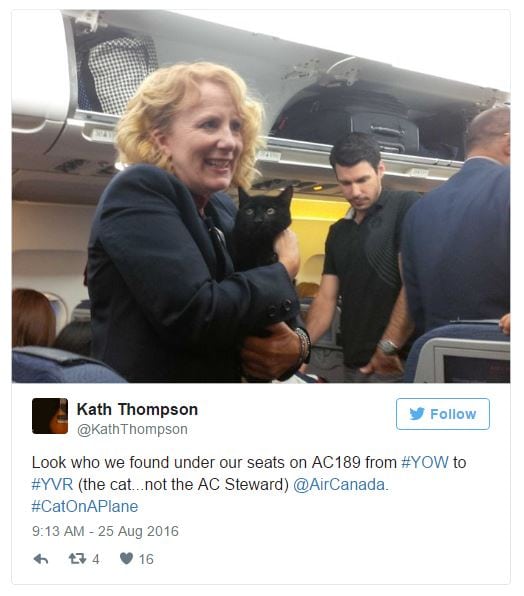 Seems the man in seat E1 was not the least bit concerned a cat was traveling beneath his feet on a Canada Air flight between Ottawa and Vancouver. Even as the flight attendant came down the aisle asking if anyone had seen a cat, according to his seatmate, he seemed non-plussed, though, perhaps in his household, cats under the seat are a normal occurrence.

A couple traveling with a pair of cats had one escape it’s carrier bag, not becoming aware of the disappearance until later in the flight.  In an interview with CTV, Kath Thompson, who was seated next to the man, shared the following exchange upon discovering the cat’s whereabouts:

“His kids were sitting behind him and they said, ‘Oh how did you know there was a cat?’ And he said, ‘Oh, I felt something on my ankle…I would have been up in the rack above the seat if that had happened to me.”  Thompson posted the photo she took of the flight attendant carrying the escapee, who remained calm during the entire incident, on twitter.

Thompson wrapped things up in response to reporter’s query as to her thoughts the kitty was black saying,“I’m glad I’m not superstitious.”