Smoky, the tiny kitten from last week’s story Firefighters Rescue and Revive 2 Week Old Kitten, met with his rescuers today. One of the firefighters will adopt him when he is old enough. For now, he remains in foster care with Bolton & Bury Cat Rescue.

Smokey is the tiny kitten found sitting motionless on a kitchen table during a house fire in Manchester, UK last week. The story of his rescue and the image if the tiny creature with his little head in an oxygen mask touched hearts. The rescue group caring for Smoky sent us this update. 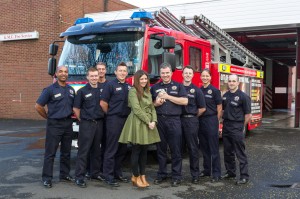 The  kitten saved from a house fire by Fire Fighters from Moss Side station last week was today reunited with his rescuers.

Smokey, as the 3 weeks old kitten was named by the Manchester Fire Crew, was found lying motionless on a table when they were called to a burning flat in Rusholme and had to be given oxygen at the scene to revive him.

Now two weeks since his life was saved, Smokey visited the Moss Side fire station with the Chairperson of Bolton and Bury Cat Rescue, Chedia Hoolickin to thank the Firemen purr-sonally for saving him. Bolton and Bury Cat Rescue stepped in to help the rescued kitten when other local services were unable to help. Little Smokey was introduced to another rescue cat in their care who was nursing four kittens and she soon adopted him as her own; washing and feeding her new baby.

In a purr-fect ending to the story, Smokey has been offered a home with one of the Firemen who rescued him as soon as he is old enough to leave his adopted mum.

Since his rescue, Smokey has been diagnosed with CH (Cerebellar Hypoplasia), a condition commonly know as ‘wobbly cat syndrome. CH is caused by an infection his biological mum contracted when she was pregnant. Although the condition is not life threatening and doesn’t prevent him enjoying playtime with his new brothers and sisters, it will mean that Smokey will struggle to walk properly.

In the same week as taking in Smokey, the Charity hit crisis point as demand for their help with unwanted cats and kittens in the Greater Manchester far exceed financial reserves. BBCR is still full to capacity and is expecting to help many more cats and kittens in 2012, but they want to thank their supporters throughout the area for helping to make the charity an unprecedented success since they formed in 2009 – particularly in the current economic climate.
Anyone interested in volunteering to help fundraise with Bolton & Bury Cat Rescue, or who would like to make a donation to help with the care of Smokey and other BBCR cats, or to adopt a cat please visit their website Bolton & Bury Cat Rescue or visit them at Bolton & Bury Cat Rescue on Facebook.

A visit to the group’s Facebook page to look at photos makes clear that kitten season is here, and their email system is sending auto response saying they are currently full up with cats. Ed. note: We send a special thanks to BBCR welfare officer Vivienne Davies, who is fostering Smokey and wrote to us with an update on him.  Cupid a Mama cat Vivienne is also fostering is playing mom to Smokey, even nursing him, while he is in BBCR care. Thanks, also, to BBCR for the material and photos in this story.

Smokey is the mostly white kitten in the photos showing him with Cupid and her kittens.