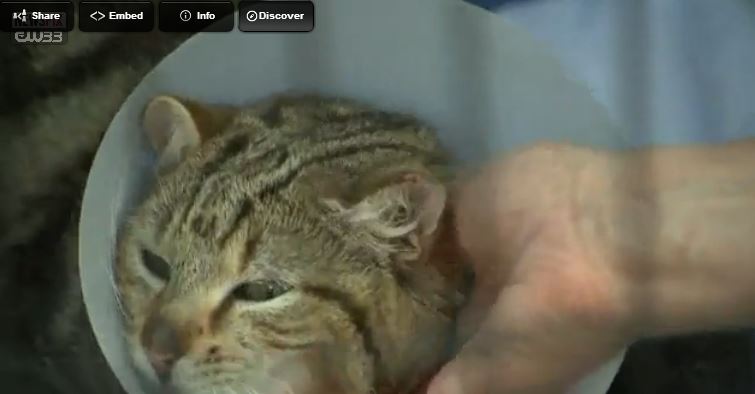 Bobbi the kitten was attacked, mutilated and underwent multiple surgeries. He survived it all and has made a remarkable recovery, thanks to the woman who rescued him and Alley Cat Allies.

“We’re happy to share that Bobbi, the kitten who survived a brutal act of cruelty in Bedford, Texas, has found his forever home with Connie Stout, who had been caring for Bobbi during his recovery,” according to a report on the Alley Cat Allies Website. “This is a bright spot in an otherwise disheartening case.” Alley Cat Allies went public with Bobbi’s story in April when two kittens were found severely mutilated in an alley in Bedford, Texas. One of the kittens had to be euthanized. Bobbi survived, but required intensive surgery.

Stout is a volunteer for Mid Cities Community Cats that runs a catch, fix and release program, according to KADF-TV and NewsFix.com. It was Stout who found and trapped the two kittens. Both were suffering from similar, severe wounds to their legs and genitals. “I took them to Dr. Epps and she found out that they had been mutilated,” said Stout. “So we realized there was foul play there,” Stout told the Star Telegram. Rewards were offered for information leading to the arrest and conviction of those responsible. The Humane Society of the United States stepped forward and offered $5,000, as well as the Maryland-based Alley Cat Allies, which put up a $7,500 reward.

“The nature of this cruelty case is particularly disconcerting,” Becky Robinson, president and founder of Alley Cat Allies, told the Star Telegram. Despite the hard work of local police, the case went cold. However, Bobbi received the medical attention he desperately needed and is now a healthy, happy cat, said Stout. “There is no question in my mind that he would not be alive today without the support we’ve received from ACA.”