Some tried to blame petmom Debbie Harris for an hours long flight delay yesterday when Ripples escaped his carrier and hid in the cockpit’s electronics compartment. It was, in fact, the fault of security staff. 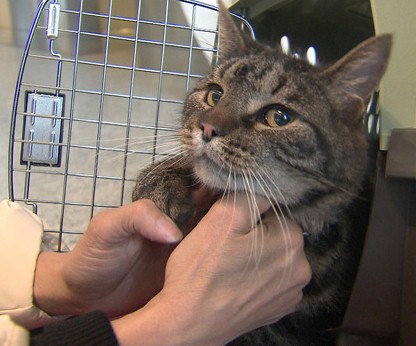 I thought “Oh, no; not again!” upon seeing a news item yesterday afternoon containing the words “cat” , “Air Canada”, and “escaped”. Fortunately, it was not another story of  a cat gone missing from cargo, possibly never be found again.

This story, as you may have already seen, was about Ripples, who was traveling up in the cabin with Debbie Harris on a flight between Halifax and Toronto, and who escaped his carrier and was found a relatively short time later in the “guts” of the cockpit’s electronics equipment. The flight was delayed from taking off  for about four hours as Ripples was located and retrieved, and then as the wiring and electronic components were checked for potential damage.

Debbie said she didn’t want to sedate her 10 year old cat for the short flight between Halifax and Toronto , so he was alert when he boarded the plane. While there was some early grumbling about irresponsible pet owners and how pets ought not be flying up the the cabin of a plane, Debbie was blameless and, once again, the case of an escaped cat was the fault of airline or airport personnel. Ripples’ crate was securely latched when he arrived at the airport, but the person conducting his security check did not properly snap the latch between the crate’s top and bottom tightly back into place.

This case only resulted in minor trauma, inconvenience and delay, and some expense for the airline, but it somewhat disturbingly adds one more case to the list of escaped cats whose carriers were compromised by airport or airline personnel.

Now that Ripples and Debbie are at their Toronto destination, she says “This is his first flight and his last flight.”

We waited to post this until we could obtain a copy of the CTV report from last evening’s news, which turned up on CNN today. The only weak part of the report is where the reporter makes the pat statement that a cat always lands on his feet. Anyone familiar with the saga of Jack the Cat knows that is not always the case.