When Sampson got out of the house he was picked up in a stray cat sweep and taken to the notorious high kill Hamilton ON Animal Control facility. He was pulled by a rescue and his life was saved; now, thanks to Craigslist, Facebook and rescue networkers he is back with his family. 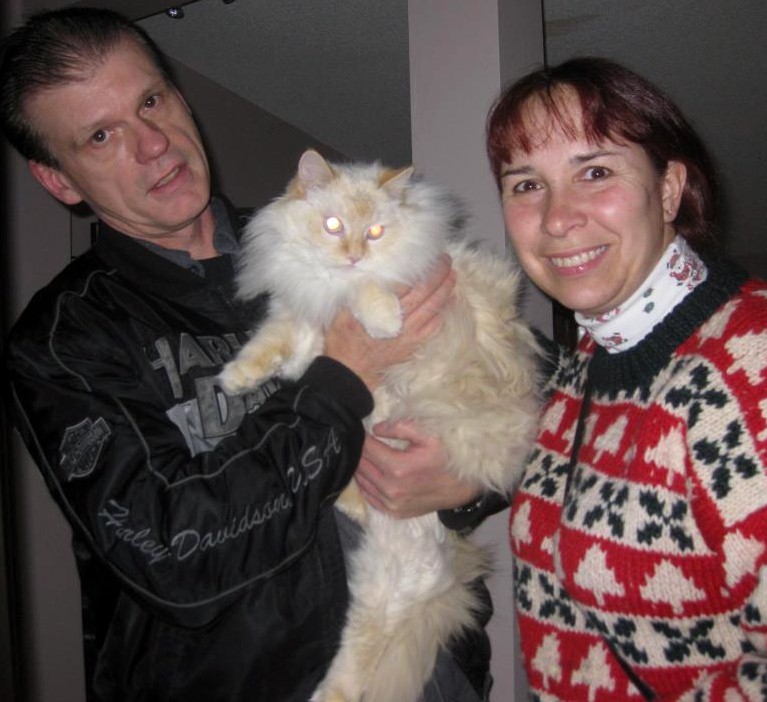 Sampson, a Persian flamepoint temporarily known as Raja,  has been reunited with his family members, Sarah Patterson and her husband.  Sarah searched relentlessly for her missing cat for over a month, during which time he was cozying up on the  lap of rescuer Janice Boast of Abbey Cat Adoptions

Sampson’s family had been looking for him since he got out of the house and was picked up by Hamilton Animal Control (HAC). Abbey Cat Adoptions pulled him from the notoriously high kill facility and saved him from being euthanized.

Sampson was picked up as a stray despite the fact that he looked like a pampered pet, and was brought to HAC with a group of 13 that also included mamas and kittens. He had no knots, no fleas, no worms, and looked like a cat that got out of the house accidentally and was only outside briefly before being caught and taken to the facility, where death is the most common outcome.

Sarah says of her cat and her efforts, “I called animal control and SPCA. He has been all over FB on my friends pages. He is very well loved and cared for. He had no fleas and was well groomed and well fed.”

Strays, or those cats designated as strays, are only kept 72 hours before being killed at HAC, according to Janice Boast of Abbey Cat Adoptions, and as is generally understood by those working to help the cats of Hamilton ON.

While Sarah’s call to HAC did not help her to find her cat, or save his life, Craigslist and Facebook both helped reunite Sarah with Sampson after his rescue from the killing facility.

Someone looking at Craigslist postings contacted Nora Barber, after seeing Sarah’ s missing cat listing there, with the notion that the missing Samson might be the rescued cat known to Abbey Cat Adoptions as Raja. Nora contacted Sarah, who immediately left messages with Abbey Cat Adoptions at their phone line and Facebook page in her eagerness to reclaim her cat.

In a fateful twist, Samson had been scheduled for an adoption appointment only days before, which was rescheduled for after the Christmas holiday. Everyone involved feels that this was a very good omen, as he was shortly thereafter identified, and was reunited with his family on December 24.

Abbey Cat Adoptions  is a no-kill, all-volunteer, foster home network dedicated to helping abandoned and rescued cats and kittens in the greater Toronto area find permanent homes. They work closely with foster homes and potential adopters to find a suitable match between families and their new pet. You can visit their Abbey Cat adoptions Facebook page for more on their activities.