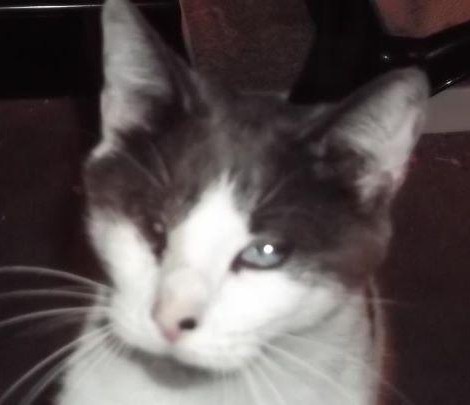 In a very tidy ending to a very long ordeal, Sammie the cat was identified and returned to his petmom on October, 9, exactly one year to the day after he walked out the front door and went missing from his Brooklyn NY home, on October 9, 2010. The then 3 year old partially blind gray and white cat had never been outside before.

Petmom Karen Hansen is quoted in today’s New York Daily News, saying “I turned my back … and we never saw him again. He just disappeared. It was heart-wrenching.”

Karen made every effort to find her missing cat, including posting fliers, publishing newspaper listings, and making a listing on an online lost and found bulletin board. There is at least one Facebook page dedicated to Sammie’s safe return, Find Sammie.

It turned out that Sammie had been living nearby, several blocks away from home, with a group of ferals who were being fed by Terri Vanzo. While trying to find homes for some of the cats she is feeding, Terri recently saw Sammie’s picture on an online bulletin board (we’re not entirely certain but it may have been Pets Missing in Action), thought there was a great resemblance between Sammie and one of the cats she was feeding.  Sammie’s description noted that he is blind in one eye, and the stray who fit his description also seemed to have vision loss in one eye. Terri contacted Karen, and that stray was indeed  Sammie, who is now safely back home. His caretaker fed him for 7 months.

Karen is overjoyed to have her boy back home, and has expressed her gratitude to all those who helped and showed support over the past year.

4 thoughts on “Sammie: Missing Cat Back Home After Exactly One Year”