A sad update for those who read Skeeter’s Diagnosis,  the story of a sweet injured stray  that we posted earlier today.

Skeeter’s Diagnosis, by Bernadette E. Kazmarski, told of Skeeter showing up on Peg Bowman’s Pittsburgh area porch, injured but with the desire to live. Peg and Bernadette took him for care, but underlying health problems and a more seriously infected wound than originally thought were too much for the little guy to endure. The women and the veterinary staff allowed him to know comfort and loving care in his final days, and his passing was far easier and more humane than if he had been alone outside. 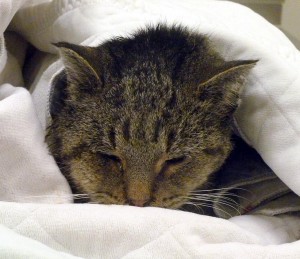 I was just about to post a cautiously optimistic note saying “Skeeter is currently in surgery to remove all the loose skin, scars, and scabs from his wound and I will be visiting him tomorrow” when I received a call from his surgeon.  He said Skeeter was currently on the operating table and the wound was far more serious than originally thought.  It was not a tight-collar wound after all but a bite wound.  The surgeon said the infected area was “as large as my hand” — an area approximately 6″ by 4″ from shoulder to shoulder and from head to back — and quite deep, penetrating all the way to the muscle.  He said Skeeter had only about a 25% chance of survival, and with FIV-related complications, would probably not heal well if he made it through the surgery.

I told the surgeon I was hoping to be with Skeeter if he had to be put down so he wouldn’t have to go to the Rainbow Bridge alone, but I said “it would be a kindness not to wake him up, wouldn’t it?” and the surgeon said “I’m afraid so”.

I am deeply grateful to have had the honor of being petmom to Skeeter if only for a few short days, and want to send out thanks to all of you who have joined me on this journey.  Skeeter was kind and gentle and I’m very glad he spent his last days well fed and free of pain.  A freezing rain is falling as I type and I am very glad Skeeter is not out there dying in the cold but is spending his last moments in warmth and being treated with care and dignity.  RIP Skeeter.

Editor’s note: Thanks to Peg Boman and Bernadette Kazmarski for their efforts on Skeeter’s behalf, and for sharing his story with us. We wish it had turned out differently.

The ChipIn for Skeeter’s Care is still open for those who wish to help Peg with Skeeter’s medical bills.