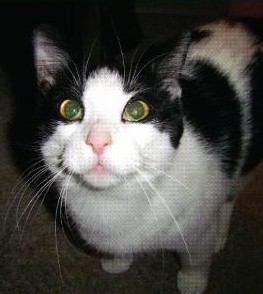 George, lost by Air Canada at Edmonton Airport on September 23 has been found dead, nearly two months from the time he ended up out of his crate and on the loose during a stopover. His body was found this past Monday, November 21, following a cold spell last week.

We reported on George in Another Cat Lost at an Airport: George Goes Missing From Air Canada Flight, on October 2. Vanessa Summerfield planned to send George from Fort McMurray AB back east to live with her family in Ontario until she could find an affordable pet-friendly place to live in Fort McMurray. George went missing from the Air Canada plane’s cargo hold during a stopover in Edmonton on September 23. In an eerily familiar back and forth, reminiscent of the case of Jack the Cat, the airline said George escaped his crate due to a missing bolt, and Ms. Summerfield said there was nothing wrong with the crate when George was turned over to the airline for his flight in the plane’s cargo hold.

George had reportedly been spotted several times on the tarmac, and employees are said to have set out food; yet the cat was never caught.

In recent weeks, cat lovers from the US and Canada, mostly Friends of Jack,  have networked via the internet to try to help the poor lost cat, and had gotten Edmonton area group Little Cats Lost to help with their efforts. Alas, George froze to death, all alone, before those trying to help could save him.

The group has a Facebook page, George Is Lost at Edmonton Airport. In addition to trying to rescue George, the group would like make it easier to find other pets that go missing form airlines in the future.